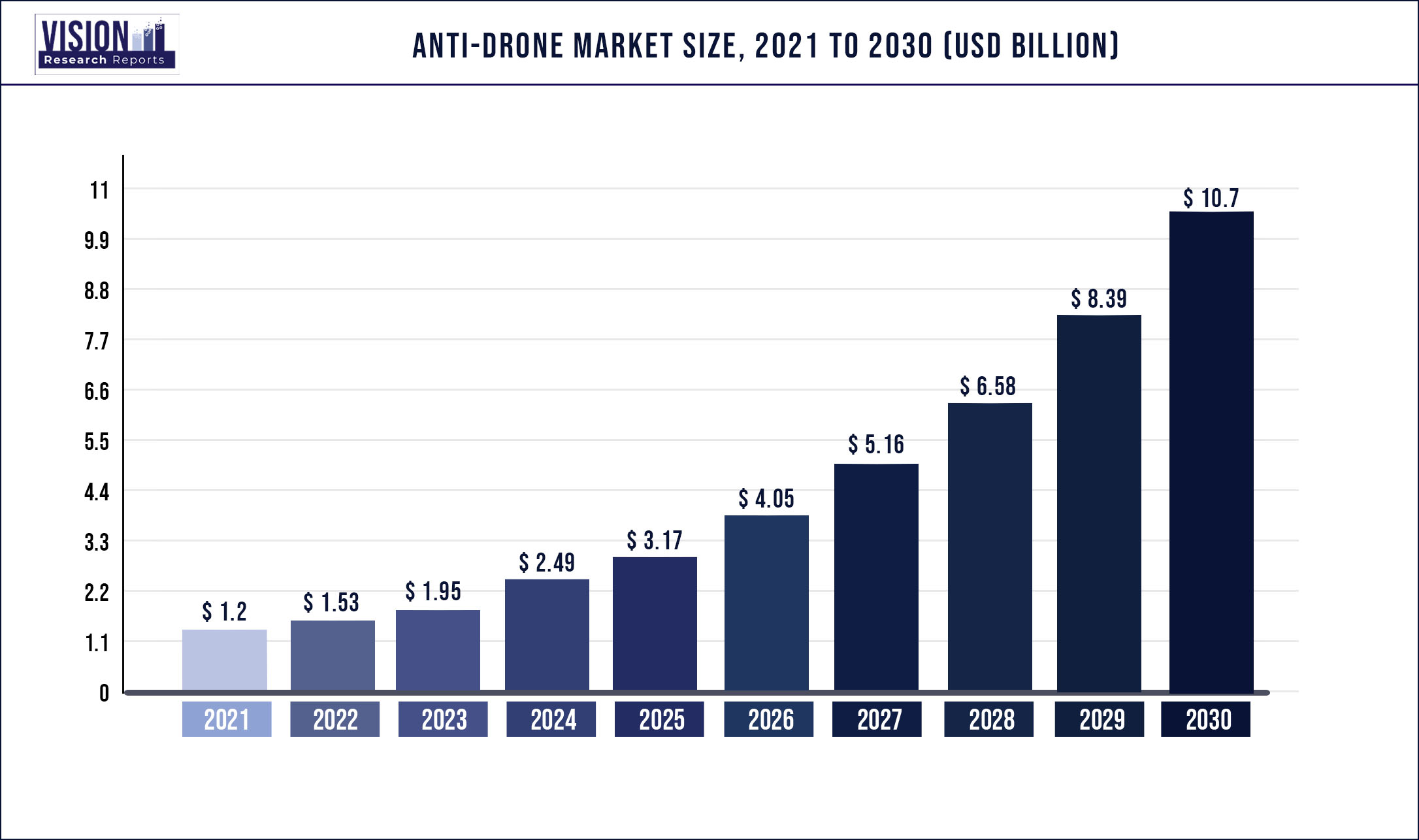 The use of drones is getting more normal which increases the risk of security and privacy. These threats are faced by both civilians and military personnel as drones can be remotely operated and even unauthorized unmanned vehicles.

Sensitive military areas require anti-drone systems to protect them from any terrorism or illegal activities. The ease of access of small-sized drones has caused a significant increase in the market investment for the  anti-drone equipments.

The sale of remote-controlled drones is legal based on location; however there are many strict no-fly zones which the common public is unaware of. However, the threat for spy-attacks and other type of attacks is higher for the regular public, military and government.

The anti-drone market helps governments identify, locate, and destroy illegal drones either via software or direct launches. Government institutions, private enterprises, and military forces are the major clients of the anti-drone market. This market is also responsible for assisting the government in various public safety operations.

The anti-drone market uses a combination of modern technology and hardware in their product offerings. For instance, in October 2021, U.S. Homeland Security struck a deal with Drone Shield Ltd., and purchased drones with on the move attack technology from them. It has also been observed that the military also invest a large amount of money in the research and development of anti-drone systems making them a significant part of the anti-drone market.

The North American region generated the largest market share for the anti-drone market in 2021 as a direct result of the heavy investment in military and defense. It has been observed that multiple start-ups are providing custom and out of the box solutions in the anti-drone market.

These systems destroy essential parts of the drone airframe through force, causing it to crash to the ground. In addition, some low-power lasers are intended to destroy electro-optical (EO) sensors located in the target area, thus disrupting UAV operation.

The electronic countermeasure segment is predicted to grow at a CAGR of 31.2% from 2022 to 2030. Drones are emerging and small in size due to advances in technology and drone technology. Therefore, there has been a steady increase in the use of small drones over the years. Therefore, several companies work in production. Compact counter-drones will improve the market size of anti-drone throughout the forecast period.

Counter-UAV systems that use electronic resistance measures often include a powerful microwave and electromagnetic weapons designed to transmit strong magnetic signals. When aimed towards unauthorized UAVs, these robust signals block data transfer between the operator and the gadget, shuttering drone operations overall.

The detection and disruption segment captured the largest revenue share of 68.0% in 2021. This segment is likely to dominate the anti-drone market throughout the forecast period. The detection and disruption defence measure is used primarily to identify, classify and detect UAV’s. After the identification, classification and detection, the UAV’s can undergo neutralization to counter the unauthorized drones.

The step for countering a potential attack is by equipping monitoring apparatuses which not only distinguishes drones from other aerial objects like airplanes and birds but also can identify the type and model for drone to alert security and deploy countermeasures.

The detection system segment is predicted to grow at a CAGR of 29.3% from 2022 to 2030. The detection systems include various techniques for detecting and identifying drones, including radar reflectance, the emergence of a particular photon, and resulting magnetic field, as well as the acoustic and electromagnetic emissions. These programs reflect growing demand due to the increasing number of security breaches worldwide.

The military and defence segment captured the largest revenue share of 58.5% in 2021, and this segment is likely to dominate the Anti-drone market throughout the forecast period. The sharp rise in illegal and terrorist activities worldwide, such as unlawful smuggling and border crossings, is expected to further adoption of anti-UAV programs between the international security forces. Increased costs in R&D by leading defence contractors, coupled with augmented use of anti-drone programs by various military forces to protect the invaders, are the factors expected to play a significant role in the growth of the military and defence segment.

The commercial segment is predicted to grow at a CAGR of 31.9% from 2022 to 2030. The growing demand for counter-UAV technology in various commercial areas, including airports, prisons, live events, and critical infrastructure, is expected to allow the adoption of such programs in all of these areas. Many busy airports worldwide are increasingly using a variety of air defence systems to protect their commercial trade aircraft from dangerous collisions with unauthorised flying objects like drones.

The cost of upgrading anti-drone systems is very high. Parts used in these systems, such as laser, radar, and advanced electrical appliances, are expensive, and hence it is difficult for the producers to reduce the overall cost of the system. Due to the high cost, these systems are not able to be used for the commercial applications such as public and home spaces, which affect the demand for it.

The North America segment accounted for the largest revenue share of 45.3% in 2021. This segment is likely to dominate the Anti-drone market during the forecast period. The aviation and defence sector, particularly in the U.S., is observing an increase in the adoption of drone technology. The Federal Aviation Administration (FAA) of the U.S. has been testing different UAS technologies at various airports during the past few years; hence demand for the product is growing.

In addition, the U.S. Army, along with other members of the North Atlantic Treaty Organization (NATO), was using these programs in war-torn areas of Syria and Afghanistan, leading to an increase in product sales across the region.

Asia Pacific is expected to grow at a CAGR of 32.1% from 2022 to 2030. This growth can be attributed to an increase in funding from the government for the development of aviation and defence infrastructure in different countries, majorly China and India. Numerous institutions and companies across the region, including China National Nuclear Corporation, the Beijing Institute of Technology, and Nova Sky, are forming partnerships to focus on R&D to counter UAS technology, which enhances regional market size.

In addition, Asia pacific is a region with major political conflicts; hence countries in the region constantly try to keep their security systems and forces up to date. For instance, China has a political dispute with India plus its many bordering nations, and hence the nation has started to strengthen its forces and defence infrastructure.