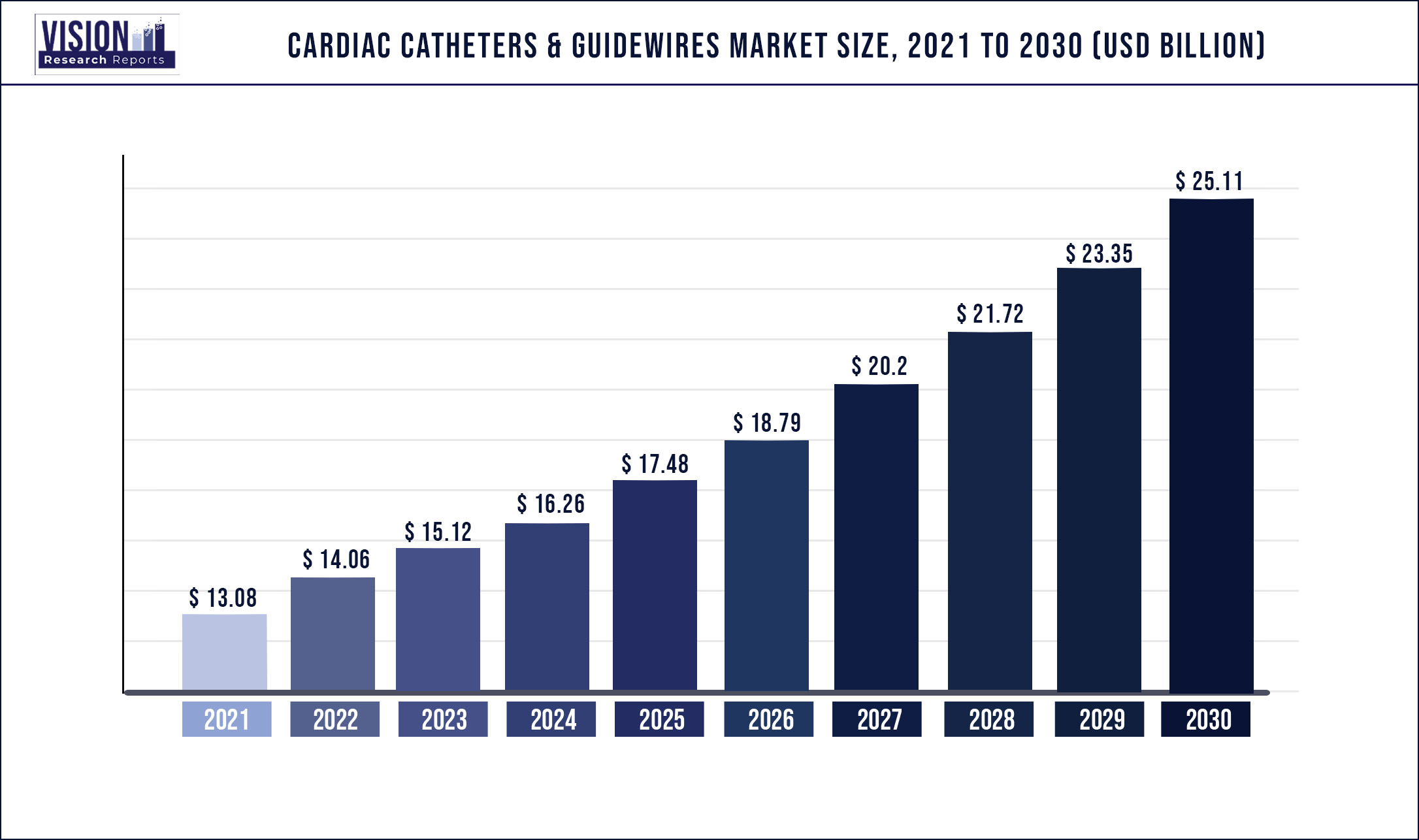 The industry is expected to grow due to the increasing geriatric population, lack of substitutes in the market, rising incidence of diabetes across the globe, and technological advancements. Diabetic patients are more prone to develop certain health conditions, such as high cholesterol, high blood pressure, heart diseases, and stroke. In addition, long-term diabetes damages the blood vessels and nerves that directly control the heart muscles. This also increases the chances of developing Cardiovascular Diseases (CVDs).

Moreover, people suffering from diabetes also tend to develop heart disease and stroke at a very young age. Furthermore, diabetes triggers the risk of developing obesity, which, in turn, increases the predisposition to CVDs. The high incidence of diabetes is one of the major reasons for the increased prevalence of CVDs across the globe. For instance, according to the American Diabetes Association, around 37.3 million Americans, which was around 11.3% of the total population, were estimated to be suffering from diabetes. Moreover, as per the 10th edition of the International Diabetes Federation, 537 million people worldwide have diabetes, which is anticipated to reach 700 million by 2045. Furthermore, in recent years, the Caribbean, Middle East, Latin America regions, and some nations of the Pacific Islands marked the highest prevalence of diabetes in the world.

Moreover, technological advancements in cardiac catheters & guidewires devices can support clinicians in identifying patients with a high risk of disease, which is anticipated to spur the industry growth. For instance, in February 2022, Medtronic received FDA expanded approval for cryoablation cardiac catheters for pediatric patients for the treatment of a common heart rhythm disorder. Hence, such product launches provide growth opportunities. The COVID-19 pandemic had a negative impact on the industry due to a decrease in surgical procedure volumes. However, due to the ease in restrictions, countries have resumed elective procedures, suggesting that the industry will keep growing during the projected period.

Similarly, in the case of angioplasty and other interventional procedures, the insertion of a catheter is the initial step of these procedures. The increasing cases of cardiovascular diseases across the globe are one of the major factors contributing to the segment's growth. For instance, as per the report published by the World Heart Federation in 2018, 80.0% of the deaths in low- to middle-income countries are caused due to cardiovascular diseases. Similarly, as per the World Health Organization (WHO) in 2018, around 17.9 million deaths occur globally due to CVDs.

Therefore, such factors are anticipated to propel the demand for cardiac catheterization, angioplasty, and other interventional procedures, which, in turn, boost the demand for cardiac catheters. Moreover, currently, no substitutes for cardiac catheters are available in the market, which is also a major driving factor for the segment's growth. Recently, the market for cardiovascular catheters has witnessed notable industry events, which are expected to significantly increase product demand during the forecast period. For instance, in April 2019, Oscor, Inc., a U.S.-based implantable devices manufacturer, announced a strategic alliance with Micro Interventional Devices, Inc. (MID) to commercialize minimally invasive annuloplasty technology.

The hospital segment dominated the global industry in 2021 with a revenue share of over 40.98% due to the high incidence of cardiovascular diseases across the globe. For instance, as per the report published by the Centers for Disease Control & Prevention (CDC) in 2018, coronary heart disease is the most common type of cardiovascular disease and more than 370,000 people die every year in the U.S. due to it. It also reported that every year, around 735,000 Americans have a heart attack. Angioplasty, PCI, and cardiac catheterization are majorly recommended for the treatment of such problems, thus, an increase in cases of such diseases is expected to boost the hospital admission rate.

In addition, the rising number of hospitals across the globe is also anticipated to support the segment growth over the forecast period. For instance, as per the report published by the American Hospital Association in 2019, there were around 6,210 hospitals in the U.S. in 2018, of which 2,968 are nongovernment not-for-profit community hospitals and 972 are state and local government community hospitals. The Ambulatory Surgical Centers (ASCs) segment is expected to register the highest CAGR during the forecast period. Ambulatory surgery facilities sometimes referred to as outpatient surgery centers, are frequently chosen by patients having less involved surgeries that only need a brief hospital stay.

Rapid healing is possible with minimally invasive interventional techniques, which also have a short hospital stay. Thus, patients opting for such procedures generally prefer to choose ASCs. For instance, Percutaneous Transluminal Coronary Angioplasty (PTCA) and Percutaneous Transluminal Angioplasty (PTA) are minimally invasive interventional procedures, which allows rapid healing, and the patients can get back to their normal life within a short period. Currently, the demand for minimally invasive procedures is increasing across the globe owing to its several advantages, which, in turn, boost the demand for ASCs.

North America dominated the global industry with a revenue share of over 45.67% in 2021. This can be attributed to several factors, such as increased adoption of cardiac catheters and guidewire technology in primary care settings, improved accessibility, and high healthcare spending in countries with efficient reimbursement policies. Technological innovations and the growing incidence of chronic conditions are anticipated to further propel the region’s growth. The increasing incidence of chronic diseases in this region, such as cardiovascular disorders, has created a high demand for imaging analysis. For instance, according to the CDC, each year, around 805,000 people in the U.S. suffer from a heart attack. The region is expected to maintain its dominance throughout the forecast period.

Moreover, the annual per capita healthcare expenditure in the U.S. is the highest in the world (USD 11,172, on average, in 2018), with healthcare costs growing between 4.2% and 5.8% annually over the past five years. This is likely to propel regional market growth. Asia Pacific is expected to register the fastest CAGR during the forecast period. The rising prevalence of cardiac diseases has created a demand for cardiac catheters & guidewires equipment in APAC countries. Furthermore, with some of the highest diabetes rates in the world, India and China have been the most afflicted countries. Diabetes claimed the lives of about 1.5 million people in 2019, according to WHO estimates. The population of ASEAN countries is expected to reach 693,000 by 2025. According to the British Medical Journal, the incidence rate of diabetes and cardiovascular disease would likely reach 20% by 2025.