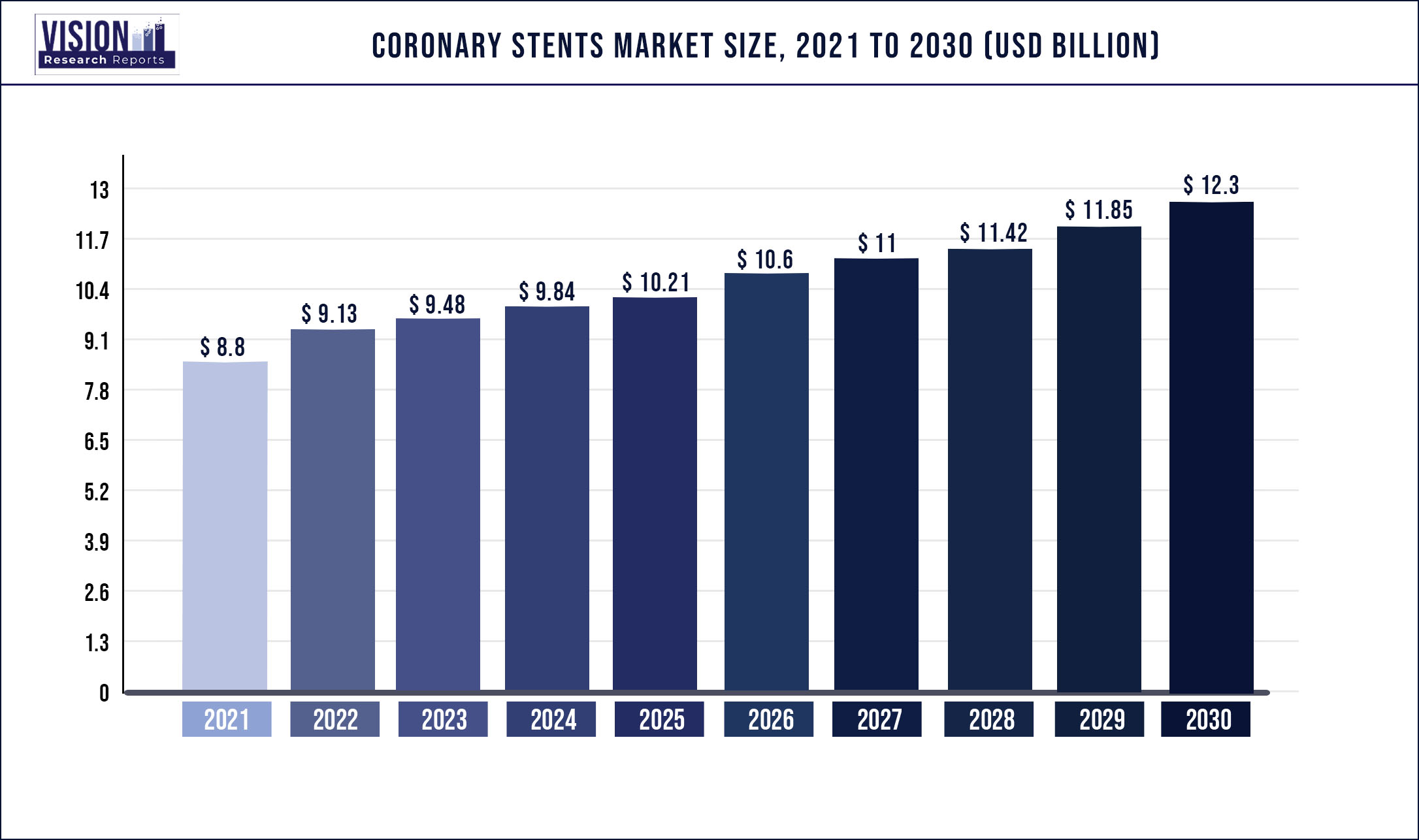 Increasing adoption of minimally invasive surgeries and Percutaneous Coronary Intervention (PCI) procedures is expected to drive the market in the coming years. For instance, according to The Korean Journal of Thoracic and Cardiovascular Surgery, the proportion of PCI for Coronary Artery Disease (CAD) was 78% in 2016, and the country-specific PCI proportion was 96%, which was significantly higher than the global average. As a result, the unprecedented growth in CAD incidence, along with an increase in the proportion of PCIs done in these CAD patients, is expected to raise demand for an effective coronary stent technology.

Technological advancement and the launch of 2nd generation drug-eluting stents are further fueling the growth. For instance, Abbott Laboratories Laboratories' XIENCE Sierra became the first DES approved for CTO indications in the US in May 2018. Medtronic followed suit in early 2019, obtaining FDA approval for the use of its Resolute range of DES in CTO indications. In addition, many companies have recently launched newer versions of their coronary stent systems in the US, notably Boston Scientific's Synergy Megatron in January 2021 and Abbott Laboratories Laboratories' XIENCE Skypoint in June 2021.

The global COVID-19 pandemic has had a negative impact on the market for coronary stents. According to guidelines from physician societies throughout the world, procedure deferrals primarily impacted less urgent or elective procedures for eligible patients. ACC's ((American College of Cardiology) 2020 guidance, for instance, recommended postponing non-urgent procedures like CTO interventions and surveillance angiography during the peak of the COVID-19 pandemic. These guidelines have influenced physicians' treatment decisions throughout the world. Additionally, according to the European Society of Cardiology recommendations, all emergency and urgent PCI procedures (treatment of STEMI, high or intermediate risk NSTEMI, cardiogenic shock, and unstable angina) should be continued during the peak of the pandemic and in the subsequent resurgence of COVID-19, while only elective PCI procedures (CTO interventions or treatment of NYHA II symptoms) should be deferred.

Moreover, recovery of the coronary stent market from the COVID-19 pandemic is anticipated to be aided by the continuous performance of urgent PCI procedures and an increase in capacity utilization for performing non-elective procedures.

The coronary stent market is driven by reimbursement coverage provided by the general public Center for Medicare & Medicaid Services (CMS) and private payers. The coverage is availed under national coverage determination for carotid artery stenting, including products and service providers. From January 2020, the Centers for Medicare & Medicaid Services (CMS) proposed reimbursement for some angioplasty and stenting procedures performed in the ambulatory surgical centers (ASC), which is expected to boost the market revenue over the forecast period.

The Drug-Eluting Stents (DES) segment dominated the market for coronary stents and held the largest revenue share of over 66.0% in 2021. The continued advancement and launch of the new devices are important factors in strengthening DES's dominance as the preferred device for PCI procedures. The competitors in the market continue to develop and launch technologically advanced DES, such as some of the notable launches are Abbott Laboratories Laboratories' XIENCE Skypoint, Medtronic's Resolute Onyx, and Boston Scientific's Synergy. In comparison to the previous generation devices, these newer-generation DES provide greater stent integrity, higher deliverability, and lower complication rates.

Despite initial disappointments such as overcoming the clinical shortcomings associated with the Absorb BRS representing a technological challenge; and then Boston Scientific's decision to discontinue its Renuvia BRS entire project in 2017, BRS technology has been an interesting technology for physicians as well as market competitors. This is primarily due to the ability of BRS technology to lower the risk of in-stent thrombosis associated with metal stents or most existing old-generation stents. Several BRS devices are available in the European region, including BIOTRONIK's Marmaris, Elixir Medical's DESolve, and REVA Medical's Fantom - all of which have favorable trial results.

Considering growing competition for the BRS and DES device types, the BMS has become less appealing to competitors due to low technological barriers to entry and clinical evidence demonstrating BMS's inferiority to DES. However, the BMS stent type managed to maintain its foothold in the market in 2021, owing to factors such as its low device cost. Bare Metal Stents (BMS) held a substantial share in the market as of 2021. Though the advancement in DES is replacing the usage of BMS, still it is being used in many PCI procedures due to its low cost and low hospitalization rates. Bioresorbable Scaffolds (BRS) are the newest technology introduced in the market after DES. Abbott launched the first bioresorbable vascular scaffold system, Absorb in 2016. However, the company recalled the product globally in 2017 due to some adverse reactions associated with it. Companies are investing to develop newer generation BRS with better patient compliance.

North America dominated the market for coronary stents and accounted for the largest revenue share of over 32.0% in 2021 and is anticipated to witness the same trend over the foreseeable future. A sedentary lifestyle resulting in obesity and other cardiovascular diseases such as heart attack, stroke, Ischemic Heart Diseases (IHD), etc., are primarily driving the coronary stents market in North America. In addition, technological advancements in coronary stent technologies, such as Drug-eluting stents and the use of biodegradable materials, have further augmented the market growth. The presence of mature market players such as Medtronic, Abbott & Boston Scientific is fueling market growth in this region.

In the Asia Pacific, the market for coronary stents is expected to exhibit the fastest growth rate in terms of revenue generation. This market is driven by some additional variables of enhanced screening for CAD, economic growth, regulatory updates, and notable beneficial reimbursement in some the countries such as Australia and South Korea. Furthermore, increased government investment in healthcare and conducting new initiatives to bring in devices at affordable prices in cost constraint markets such as India and China are influencing this market as well.

For instance, in China, to address inflated pricing and other issues in the delivery of expensive medical supplies, the Chinese government launched a centralized procurement scheme for high-value medical consumables in January 2021. The government aims to use this initiative to skip the associated suppliers and buy the items straight from the manufacturers, lowering the inflated pricing. As a result, the cost of coronary stents has dropped dramatically in China. The average price of coronary stents has been reduced by 93 % since 2019 to grab the national tender.