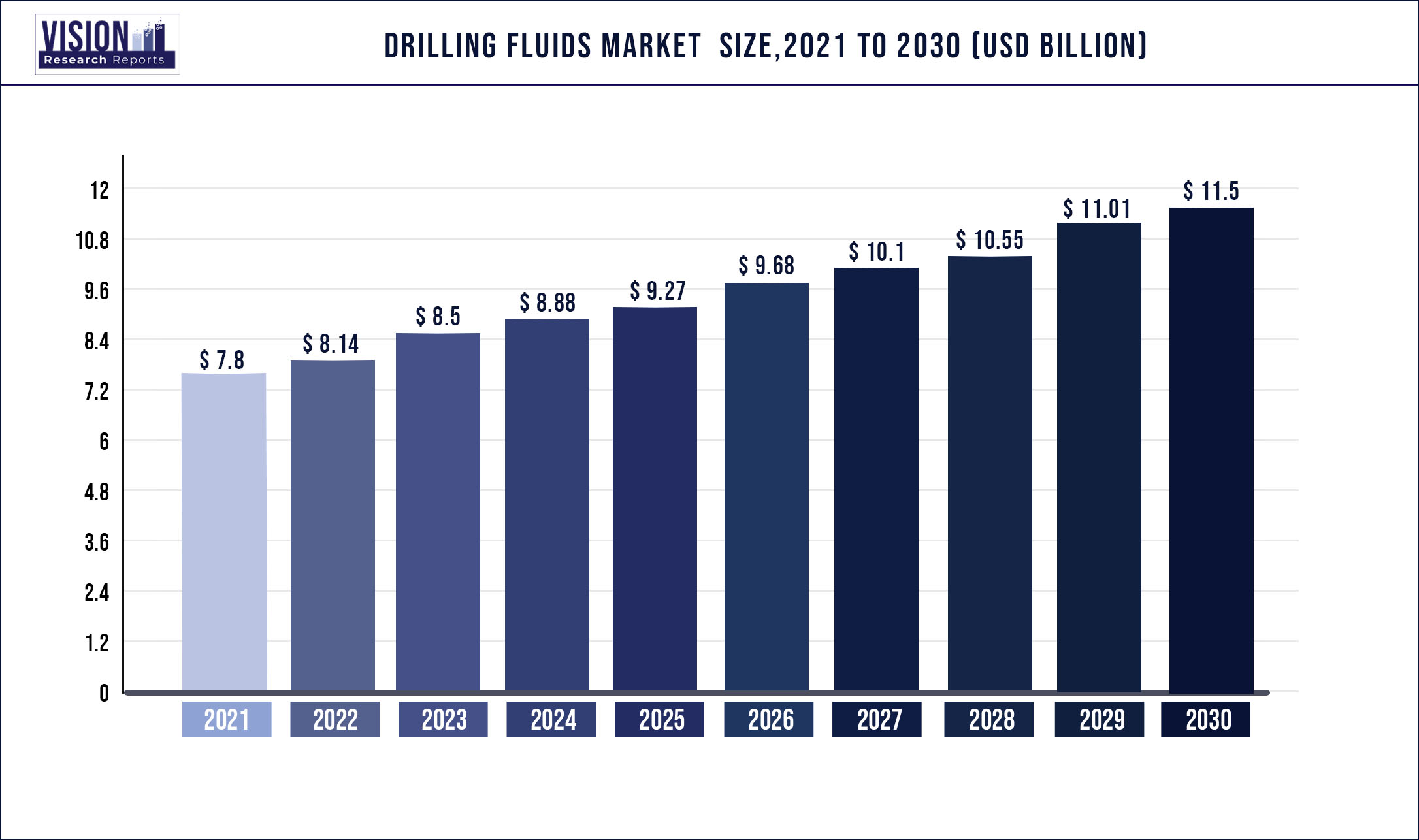 Growth is attributed to the increasing demand in the energy industry, which is anticipated to drive growth in the drilling fluid market. The growing demand for crude oil by various industries, such as transportation and energy, has been ramping up oil & gas production globally. Growing concerns about crumbling boreholes, handling solid waste, and spill containment are anticipated to increase drilling fluid demand significantly during the forecast period. The oil and gas industry, particularly the industries that are linked with it, has been creating immense opportunities in the market.

Water-based drilling fluid captures the highest market share across the globe. This is attributed to the increasing requirement for water-based fluid in horizontal drilling like wells. Water-based is considered to be less harmful to the environment than other oils, which are expected to drive demand in the forecast period. Water-based oils are used in 75% of drilling wells globally. The types of fluids used in this are freshwater, brine, saturated, or formate brine, which is less toxic, resulting in creating a huge potential for the industry in the coming years.

Product manufacturers have been taking several strategic initiatives, such as new product development, partnerships, M&A, collaborations, agreements, and joint ventures. These strategies have been adopted to increase market penetration and create enough opportunities for technology implementation for different end-use applications in the region.

The major challenge for the product is its adverse effect on the environment due to its toxicity. Water-based oil is still less impactful to the environment in comparison with oil-based fluids. The degree of impact also depends on the type of oil used in the existing environmental conditions. This environmental impact has brought certain restrictions on its use in various parts of the world.

Water-based dominated the global market with a revenue share of about 52.1% in 2021. They are used to drill over 75% of wells globally. The type of fluid selected in the operation depends on the well’s condition, which comprises formate brine or saturated brine and fresh water. Growing concern towards toxicity and biodegradation of other drilling fluids is expected to play a vital role in rising product demand over the projected period. Water-based oil is expected to gain significance in the coming years owing to its ease of use and discharge feature in offshore activities. The rising demand for an efficient fluid system in high-pressure and high-temperature wells is anticipated to trigger the demand for water-based oils.

Oil-based product is the second-largest revenue contributor to the product market globally. Oil-based drilling fluid is used in drilling engineering and is the composition of oil and water in continuous and dispersed phases, respectively. Oil-based is expected to gain significance in the future, owing to its improved lubricity. Due to the increasing demand for lesser corrosion of drilling tools, and higher thermal stability, it is expected to gain significantly during the forecast period. Though Oil-based fluid is anticipated to witness significant growth in coming years, its reaction affects the environment, resulting in stringent regulations imposed by the government on its use.

Synthetic-based fluid is anticipated to witness rising growth due to biodegradability characteristics. Its production consists of base oil, such as esters, poly alpha-olefins, and linear paraffin. Synthetic fluids are expected to gain importance during the forecast period due to their low toxicity, low fluid loss, and low bioaccumulation potential. Increasing concerns about downhole losses, and maintenance cost in deep waters projects has urged oil and gas companies to move towards, a better, less harmful to the environment, and more efficient fluid system.

Onshore application dominated the drilling fluid market with a share of 60.3% in 2021. Its high share is attributed to the increasing number of oil drilling activities to fulfill growing energy needs. Due to an increase in the number of research activities to develop abandoned oil wells and revived projects in various onshore oilfields, the worldwide volume of oil and gas production is expected to grow dramatically. Growing onshore oil & gas exploration in countries like Saudi Arabia, the U.S., China, and Russia is expected to increase awareness and demand during the forecast period.

Growing global offshore rig count coupled with significant development of existing offshore wells both in deep and ultra-deep waters majorly, in the Gulf of Mexico, North Sea, Persian Gulf, and the South China Sea, is anticipated to drive demand in the forecast period. The increasing number of ongoing projects and implementations in the Middle East and Africa is expected to provide immense demand opportunities to the market.

North America dominated the market with a revenue share of 25.3% in 2021 and is expected to witness the same trend during the forecast period. Increasing oil and gas production with significant oil field development, particularly in the U.S., is anticipated to trigger the demand in the region. Also, massive oil reserves in Canada play a major role in driving the demand in the region. Canada is the fifth-largest producer of crude oil and natural gas. The significant development in Canada’s oil & gas field has been a key influencer in the industry growth in the region.

Europe is predicted to witness a huge industry expansion due to significant drilling fluid requirements in the horizontal wells, particularly in Italy, Norway, Denmark, the Netherlands, France, and the UK. Growing demand for crude oil has been influencing E&P businesses in Europe to get involved in extensive drilling activities in onshore and offshore locations.

Asia Pacific is expected to see huge growth due to the exploration of deep waters and tight oil reserves in the region. Various advanced technological implementation to reduce the production cost and enhance efficiency is playing an important role in the growth of the market in the region and is expected to expand further in the coming years.