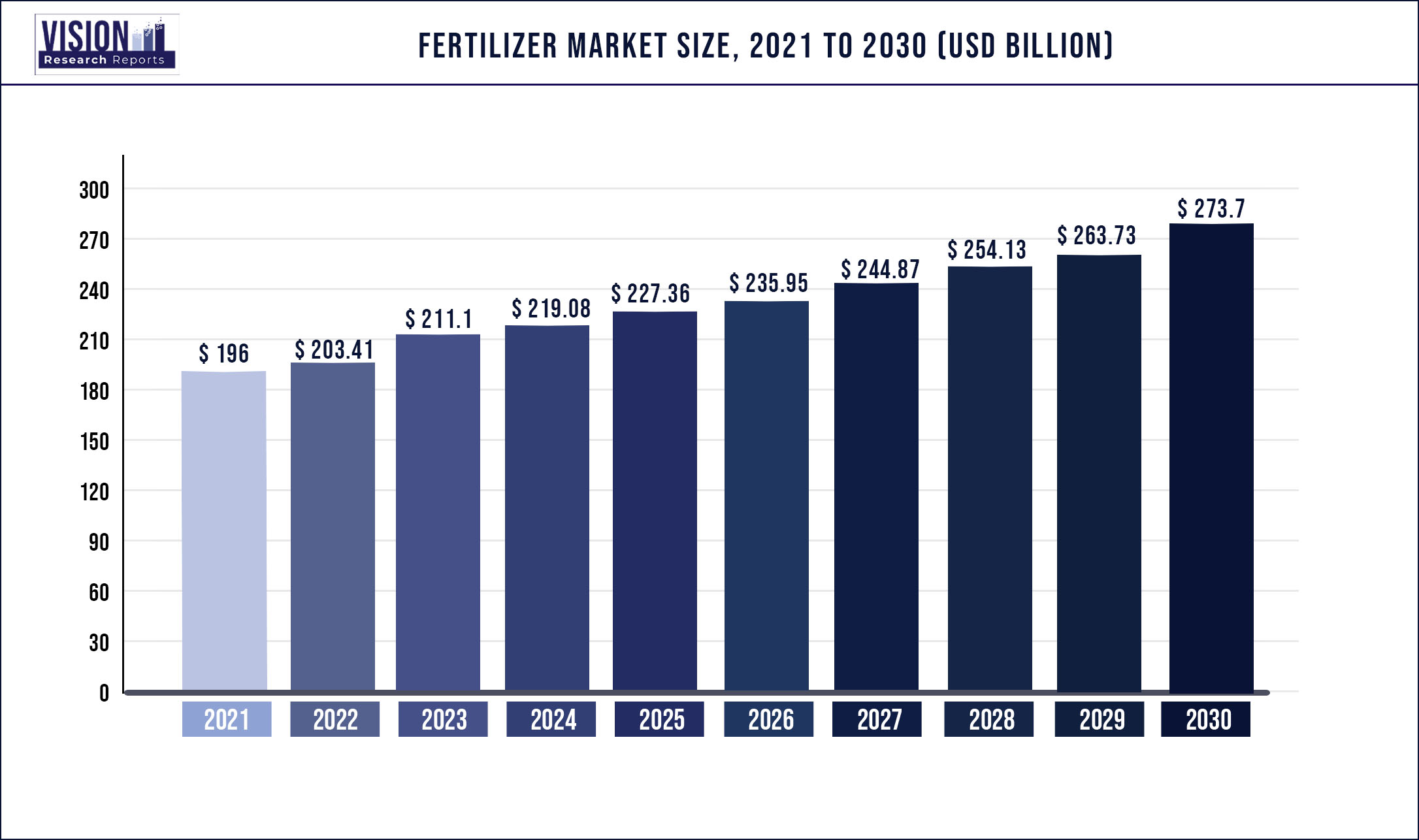 Fertilizers derived from organic or inorganic origin and are applied to the soil or plant tissue to increase the crop productivity, by supplying nutrients essential for the plant growth. For instance, nitrogen-based fertilizers contain nitrogen which is the main constituent of chlorophyll that facilitates photosynthesis process in plants. Phosphorous fertilizers are beneficial for the roots of plants as phosphorous is present in protoplasm of cell that promotes cell growth and proliferation. In addition, organic fertilizers are natural fertilizers obtained from agricultural waste, industrial waste, municipal sludge, or livestock manure. These fertilizers promote reproduction of microorganisms, enhance the physical & chemical properties of soil, and enhance the water retention capacity of the soil.

Moreover. fertilizers are chemical compounds that are applied to plant tissues or soil to provide one or more nutrients required for plant growth. Higher crop yields are encouraged while soil nutrient availability is maintained and increased. The usage of organic fertilizers has risen, allowing farmers to utilize fertilizers more safely and efficiently while reducing the risk of toxic fertilizer exposure.

Fertilizer market is gaining huge popularity as it plays a crucial role in improving the crop yield by providing essential nutrients to the crops such as nitrogen, phosphate, potassium, and others that improves the soil fertility. The demand for fertilizers, especially in agriculture sector has increased rapidly as growing population has led to an increase in the demand for food. In addition, lack of nutrients in soil due to use of pesticides and other harmful chemicals has led to decline in agricultural productivity. This is expected to increase the demand for fertilizers. Moreover, fertilizer sector is fragmented with various fertilizer companies operating around the world. Because fertilizers are such a crucial instrument for increasing agricultural output, industry participants are forming strategic alliances and joint ventures to expand their geographic footprint and product portfolio. For example, in 2019, the Haifa Group announced that they have expanded their Controlled Release Fertilizer (CRF) factory in France for producing 8,000 MTPA. Using this technology, the company was able to increase its manufacturing capacity by up to 24,000 MTPA. In 2018, Yara International ASA paid USD 255 billion for Brazil's Vale Cubatao Fertilizantes Complex. As a result of this strategy, the company was able to strengthen its nitrogen production assets and market position in the Brazilian fertilizer industry.

Since the COVID-19 outbreak, the fertilizer industry has been significantly affected in many parts of the world by the outset of the pandemic. Due to the shortage of labor and the shutdown of a few fertilizer plants located in the integrated chemical complexes, shipments were affected in the initial lockdown process. China, being the epicenter of the pandemic, was greatly impacted in the beginning. However, the conditions in the country have stabilized, and production rates have increased for all fertilizers. Hence, the overall effect of COVID-19 on the fertilizer industry is observed to be moderate.

The global population is increasing at a rapid rate. This growing population is adding to the food demand. Supplying food to this growing population has become a threat. On the other hand, arable land is declining due to industrialization and urbanization. The FAO revealed in 'The Resource Outlook to 2050' that at this time, more than 1.50 billion hectares of the world’s land surface (about 12%) is used for crop production. There is little scope for further expansion of agricultural land.

As per several reports, the per capita arable land area will decline to 0.18 ha by 2050 across the world, compared to 0.15 ha in developing countries and 0.42 ha in developed countries. Further, the global population of 7.4 billion in 2016 is projected to increase to 9.7 billion by 2050, with almost all increases occurring in developing countries. Thus, it is recommended that global food production be increased by 60.0% to 70.0% between 2005 and 2050. As a result of population expansion and a steady land degradation rate, the per capita land is expected to decrease in the future. Thus, this has led to a situation where there is pressure on the existing arable land to produce more food using technologically advanced fertilizers in a sustainable way.

The rising population especially in developing countries such as India is anticipated to increase the demand for fertilizers. As fertilizers play an important role in enhancing the crop productivity by improving the soil fertility, they support the growth of crops. The growing population has led to an increase in the demand for food. Although, rise in awareness campaigns to educate the farmers regarding benefits of fertilizers such as promoting the uses of fertilizers via television advertisements and workshops is estimated to drive the fertilizer demand during 2022-2030. Moreover, now-a-days, liquid fertilizer administration that is more effective and efficient guarantees that plants and crops get the nutrients they need at the correct time and in the right place, with minimal waste. As a result of the development of novel urease inhibitors and low-cost polymer coating technologies, highly efficient fertilizers are rapidly developing in the agriculture business in numerous fields such as cereals and industrial crops.

Furthermore, as stated on September 24, 2020, in the World Fertilizer, international magazine, agriculture plays an important role in economic development of India, and more than 50% of its population is dependent on agriculture. Also, India ranks third in the world for food grain production after China and the U.S. Hence, increase in the demand for food production across the world is estimated to drive the demand for fertilizers market. As fertilizers are food for plants, without the use of fertilizers the crop yield and production would decrease significantly. All these aspects are estimated to drive the demand for fertilizer market during 2022-2030.

The use of fertilizers should be optimum and must be regulated as excessive use of fertilizers leads to pollution. For instance, nitrogen-based fertilizers promote the growth of plants. However, excess use of nitrogen-based fertilizers is dangerous as it has toxic effects on animals, humans, plants, and water bodies. Endogenous nitrozation has been linked to high-nitrate diets, which could lead to thyroid disease, several types of human malignancies, neural tube abnormalities, and diabetes. In addition, it contributes to the climate change and emits harmful greenhouse gases such as nitrous oxide along with increasing unpredictability and a strong policy focus on the environment by government, which is estimated to hamper the fertilizer market growth during the forecast period.

Increase in Adoption of Organic Fertilizers to Generate Enormous Opportunities

Organic fertilizers are gaining huge popularity as it improves soil nutrients, water retention capability, and soil structure. To improve agricultural productivity, organic fertilizers are made from natural plant leftovers & trash, animal manures & excreta, microorganisms, and botanical extracts. Organic fertilizers disintegrate quickly and have no detrimental impact on surface or groundwater, making them safer for humans, animals, birds, and anything else that comes into contact with them. These fertilizers have a long shelf life and improve soil structure while enhancing water and nutrient retention capacity. They are chosen for producing residue-free agricultural yields since they are slow-releasing non-toxic fertilizers that do not leave any residues in the food. Moreover, synthetic or inorganic chemicals contain chemical molecules such as ammonium nitrate, potassium sulphate, and others that are disruptive to the soil. However, organic fertilizers are rich in organic matters such as manure, crushed shells, pulverize fish, and others that helps microbes to thrive via natural biological process. As organic fertilizers nurture the soil with organic matter, they reduce the need for pesticides. Organic fertilizers also improve the crop resistance to erosion.

Furthermore, various government schemes such as financial aids to promote the use of organic fertilizers is estimated to generate huge growth opportunities. For instance, in 2015, Indian government had launched Paramparagat Krishi Vikas Yojana (PKVY) to promote the use of organic fertilizers and organic farming. Under this scheme, a financial assistance of Rs. 50,000 per hectare for 3 years is given to the farmers out of which, Rs. 31,000 is given as incentives. These factors are estimated to generate huge opportunities in the global fertilizers market during 2022-2030.

The agriculture sub-segment accounted largest revenue share in 2021. The demand for fertilizers in the agriculture sector has gained huge popularity owing to rising global population, globalization, and development of smart cities, which has led to decline in the availability of arable land and increase in the demand for food. To maintain the level of nutrients in the soil, fulfill the nutritional requirements of crops, and boost agricultural productivity, fertilizers are important. As stated on October 30, 2019, by Future Farming, the brand focusing on smart farming, the world’s population is estimated to reach 10 billion mark by 2050. Hence, it is crucial to boost the agricultural productivity to meet the food requirements of the growing population. Hence, the use of fertilizers in agricultural sector is vital to balance nutrients present in the soil and to produce quality yield with high productivity rate.

Asia-Pacific is the largest fertilizers market and accounts for around 47% of the overall market in 2021. Southeast Asia is the major fertilizer consumer in Asia-Pacific, with China representing approximately half of the consumption. The demand for nitrogenous fertilizers in Asia is recorded as strong. However, the market for potassium fertilizers is expected to grow significantly in the coming years. Demand in Southeast Asia is expected to grow further with the increasing use of neem coated urea, upscaling of Direct Benefit Transfer to farmers, and rapid adoption of water-soluble fertilizers.

In the Asia-Pacific region, rice is a big nitrogen-consuming crop. In order to boost the agriculture production in the country, the Thai government supported the farmers by providing subsidies for on-farm inputs. For instance, in 2019, the government announced to launch of new stimulus measures for Thai farmers in the form of cheap fertilizers. With the increasing agriculture production and various government schemes, the demand for fertilizers in Thailand is expected to grow during the study period.

This growth is majorly attributed to the presence of largest fertilizer consumers in this region. For instance, as stated on December 12, 2018, in the World Fertilizer, the popular platform for fertilizer news, China is the largest consumer of urea, and it accounts for one-third of total urea consumption in the world. More than 60% of urea is consumed in China which is applied as a fertilizer for the growth of cereals and oilseeds such as rapeseed, corn, soybean, and others. In addition, India ranks third in the consumption of ammonia after China and the U.S. 99% of urea in India is used as a fertilizer for growing crops. Indian farmers largely prefer urea fertilizer for growing crops as it is cheaper and subsidized compared to potassium and phosphorous fertilizers. In addition, Indonesia ranks third in the consumption of nitrogen fertilizer after China and India, in the Asia-Pacific region. Some other top fertilizer consuming countries in this region are Hong Kong SAR, Singapore, Malaysia, New Zealand, Vietnam, South Korea, and others. All these aspects are anticipated to drive the fertilizer demand in the Asia-Pacific region during the forecast period.