The global green hydrogen market size is expanding at USD 89.18 billion by 2030 from valued at USD 1.2 billion in 2020, growing at a CAGR of 54% from 2021 to 2030 driven by potential of green hydrogen to seal intermittency of solar and wind, while burning like natural gas and serving as raw material in industrial chemical processes has piqued interest of businesses, governments, and investors. 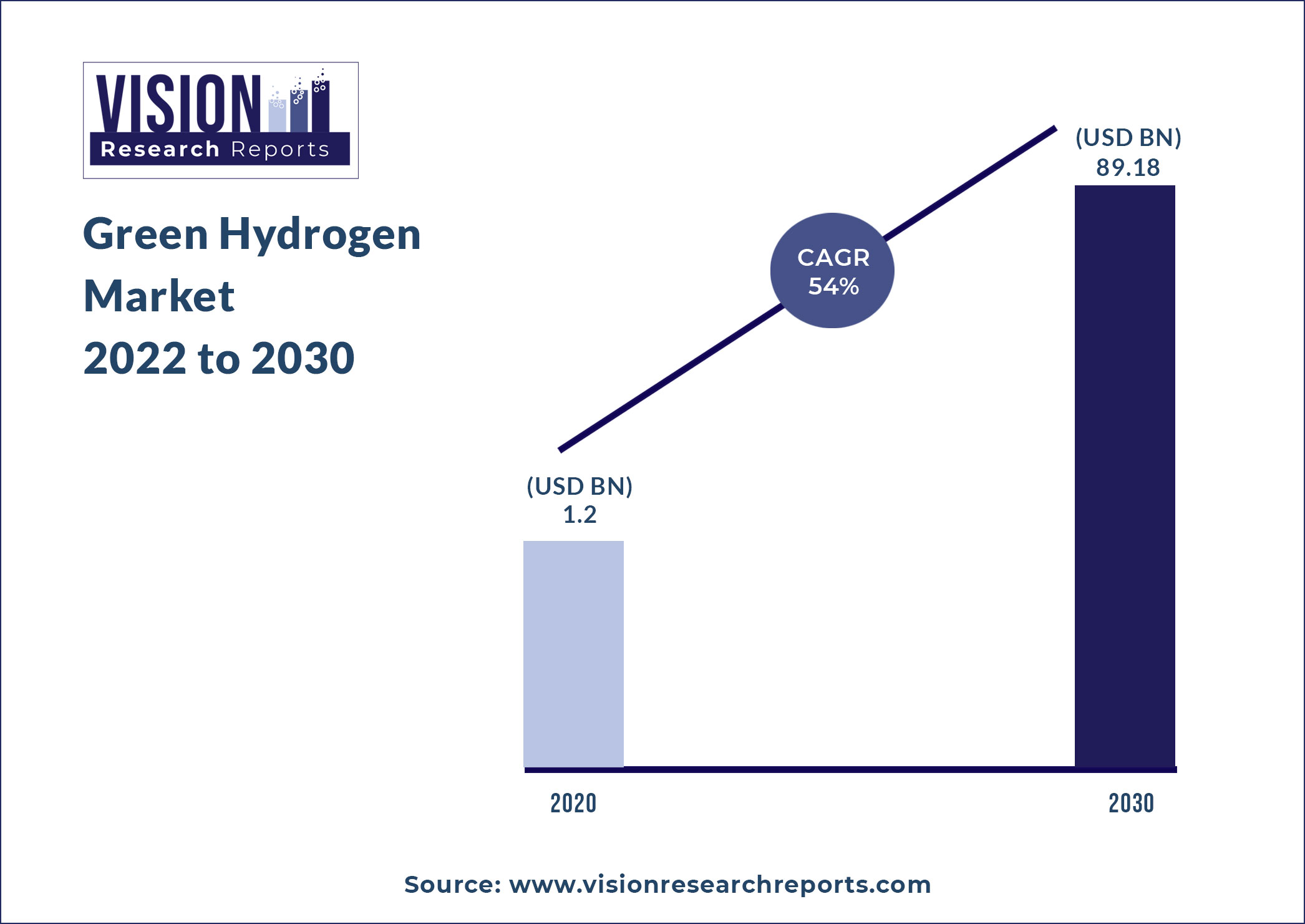 Green hydrogen is made from regenerative energy sources through water electrolysis. With the help of electric current, water is divided into oxygen and hydrogen in an electrolyzer and grey hydrogen derived from fossil fuels is differentiated (such as natural gas) and chemical properties of hydrogen are underappreciated. Hydrogen is safe for atmosphere and can be stored and converted into electricity or heat as required. Green hydrogen is a major component of energy equation and hydrogen is regarded as a primary potential renewable energy resource. It is one of the most important circular carbon economy (CCE) approaches as it is generated using solar energy. It is generated using renewable energy sources as compared to carbon-based energy found in natural gas and other fossil fuels.

Green hydrogen has been in high demand in recent years, owing to its ability to reduce carbon emissions. It also contributes toward meeting growing demand of energy across the globe. It is a sustainable energy source, hence its use is expected to increase in the future. Growth in awareness regarding the use of hydrogen as an energy carrier is expected to propel growth of the global market. In addition, growth in environmental issues drive the market expansion, highlighting the need for renewable/clean energy generation to reduce emission levels. Furthermore, rise in use of nuclear and green hydrogen fuels growth of the green hydrogen industry. However, initial investment requirements for setting up hydrogen infrastructure as well as prohibitive maintenance costs are the major factors that limit the green hydrogen market growth.

Some Key Highlights From the Report

Many industries, including oil & gas, utility, steel, and fertilizers, among others are opting for green hydrogen for harmonizing intermittency of reusable resources. In addition, this type of hydrogen is being used large scale as an energy substitute for decarbonizing industrial, chemical, and transportation sectors. In addition to these industrial uses, advantage of storing green hydrogen in existing gas pipelines to power household appliances would result in a gradual increase in demand for green hydrogen from households. It converts renewable energy into a carrier such as ammonia and can be used in fuel cell to power anything that functions on electricity such as electric vehicles and electronic devices. The multiple and economical uses of green hydrogen is driving market revenue growth.

Green hydrogen is incredibly challenging and expensive to store and transport. Since it is highly flammable in nature with a low volumetric density, high investment is required to be put into pipelines and carriers. In addition, lack of skilled workers in another factor restraining expansion and hampering growth of the global green hydrogen market.

The global COVID-19 pandemic has affected green hydrogen industry. Frequent lockdowns from early-2020 to mid-2021 gave rise to a number of problems such as lower availability of workforce and personnel, logistical difficulties, and disrupted supply chain. Amidst these obstacles, the pandemic resulted in high demand for renewable energy, which was accompanied by major revenue growth in the global green hydrogen market. Global market growth is expected to return to normal and regain traction going ahead.

Renewable hydrogen, as well as Carbon Capture, Utilization, and Storage (CCUS) have a major influence on various trends due to inter-relationship with clean hydrogen production. Biomass gasification among the set of X-to-hydrogen-to-X technologies, provides sustainable method for producing hydrogen, which helps the global green hydrogen market to expand. Other important application of green hydrogen includes Combined Heat and Power (CHP) and green propulsion, which would demonstrate the versatility of hydrogen as an energy carrier. Rising demand for CHP among various industries such as food processing, pharmaceutical, manufacturing, paper production, oil and refinery, hospitals, and utility industries is also driving green hydrogen market revenue growth.

Europe led the global market in 2019 and accounted for the largest revenue share of over 57% owing to huge investments by the European economies, aiming for an energy transition into clean a hydrogen-based economy. A large number of green hydrogen projects in the area are supporting business development. The area emphasizes renewable energy generation and has a large supply of hydrogen. For instance, in August 2019, the U.K. government announced a USD 14.8 billion investment plan for a project that is expected to use 4 GW of offshore wind for green hydrogen production by 2030.

The market in North America is anticipated to attain a prominent growth rate over the forecast period, with U.S. and Canada leading the region owing to the implementation of clean energy policies. In the U.S., California holds the majority of the market share with the growth driven by aggressive de-carbonization targets, such as phasing out of gas or diesel-powered public buses by 2040.

In Canada, Air Liquide is building a large-scale PEM electrolyzer with a 20 MW capacity, which will generate green hydrogen using hydropower. Such developments along with projects under pipeline in Canada will significantly aid the market growth in the region.

Asia Pacific market witness strong growth owing to significantly large revenue contribution from Australia and Japan. Japan had named Tokyo 2020 Olympics as "Hydrogen Olympics" and used it to fuel the Olympic Cauldron during the opening ceremony. This is a strong gesture symbolizing the influence of green hydrogen in Japan. In another instance, Toshiba is constructing its green hydrogen plant with a 10 MW electrolyzer capacity, which will have a significant impact on green hydrogen in Japan's transport industry.

Some of the prominent players in the global pulmonary drug delivery systems market include:

Segments Covered in the Report

By End Use Industry