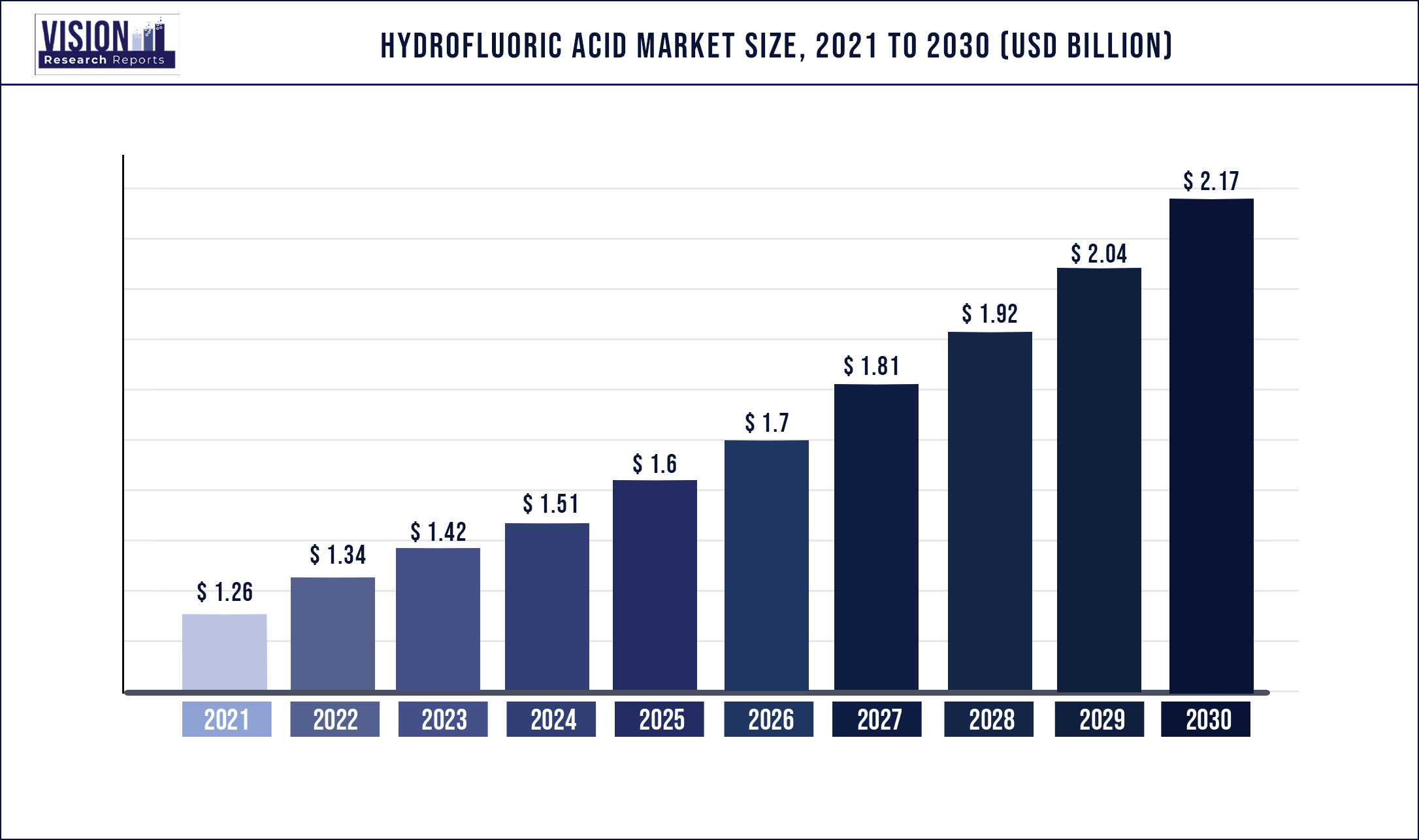 Increasing the consumption of hydrofluoric acid in the production of fluorochemicals and fluorine components worldwide is likely to boost the demand over the forecast period. It is an aqueous form of hydrogen fluoride and is mainly used for industrial purposes, such as metal cleaning, glass etching, and electronics production among others. It is also used in home rust removers. There are mainly two grades of the product available in the market; anhydrous and diluted hydrofluoric acid. The demand for anhydrous hydrofluoric acid is rising as it is less toxic and provides better quality at low temperatures.

A rise in the production level of fluorochemicals in the U.S. and Germany is further favoring the global demand. In the Asia Pacific region, the increasing production of fluorocarbons and the presence of large-scale manufacturers are expected to boost the market growth. The product demand is anticipated to rise in India during the forecast period on the account of the increasing production of aluminum and aluminum products wherein hydrofluoric acid is a key raw material. The global market is highly fragmented with the presence of numerous players in both developed and developing economies. Key players are focusing on mergers and acquisitions to increase their presence throughout the value chain. The majority of the industry players are focusing on product advancements aiming at the development of new products with eco-friendly characteristics to cater to a broader application market.

The anhydrous grade segment dominated the market with a revenue share of more than 57.64% in 2021. This is attributed to the increased product inclusion in the formulation of surfactants, fluorochemicals, and fluoropolymers among others. It is used as a catalyst in petroleum alkylation. It is also used as a reagent in the acidolysis of the benzyl group in cysterine peptides. It improves production capabilities at lower temperatures, which, in turn, has a positive impact on the demand for anhydrous grade. Diluted or aqueous hydrofluoric acidis used in stainless steel pickling, metal coatings, glass etching, quartz purification, and exotic metal extraction.

It is also used to remove native silicon dioxide from wafers. It is commonly used in research due to its ability to etch silicon compounds. The product is highly corrosive to the skin and is toxic, which is creating a barrier to global market growth. The inhalation of a certain unit of anhydrous grade may cause severe respiratory issues. Thus, a specific range of acid up to 100 mg m3 is allowed for exposure to ensure the safety of the workers. Anhydrous hydrofluoric acid is gaining demand domestically as well in metal cleaners and wheel cleaners. This, in turn, is expected to trigger the segment growth over the forecast period.

The fluorocarbon application segment dominated the market in 2021 and accounted for the largest share of more than 54.66% of the global revenue. This is attributed to the rising demand for fluorocarbons from air conditioning systems and refrigerants, thus boosting production, especially in developing economies. The hydrofluoric acid demand in fluorocarbon is increasing as it is a non-chlorinated alternative to ozone-depleting chlorofluorocarbons. It is extensively used in the pickling of stainless steel and the semiconductor industry as a cleaning agent and an etchant.

It is used for various applications, such as in the purification of quartz, graphite, and ferrosilicon, ceramic production, metal pickling, glass etching, and cleaning chemical solutions among others. The product is also used in treatment metals by removing stains and layers from the surface and offers shine and finish to the surface of the material.It is extensively used to improve fuel efficiency during the alkylation process in the petrochemical industry. Hydrofluoric acid alkylation units are process units utilized in petroleum refining to convert alkenes and isobutane (primarily butylene or propylene) into alkylate, which is further utilized to make gasoline.

The product is also used as a raw material in the production of aluminum, and the growing demand for aluminum products from different industries worldwide is anticipated to boost the market growth in the coming years. Hydrofluoric acid is considered to be a highly corrosive and toxic substance in nature. Inhalation or direct contact with hydrofluoric acid can cause severe health impacts. These types of restraints can decrease the adoption of industrial-grade hydrofluoric acid, which can further hamper the product demand.

The Asia Pacific region dominated the global market with a revenue share of over 40.89% in 2021. This is attributed to the presence of numerous manufacturers of fluorocarbons across the region. The industry is expected to be the fastest-growing market over the forecast period. The rising demand for metal and electronics & semiconductors in China is positively impacting the product demand in the country. Furthermore, the rising utilization in national defense, industrial, and civil production industries is expected to boost marketgrowth.

The market in Europe is likely to propel due to the increasing production of fluorochemicals across the region. The industry is growing across North America on the account of the increasing imports and the growing levels of R&D activities to make a better environmentally friendly product with the same performance. The manufacturing of hydrofluoric acid is significant in the Central & South America and the Middle East and Africa regions; however, the consumption level is comparatively lower than the other developed regions across the globe.