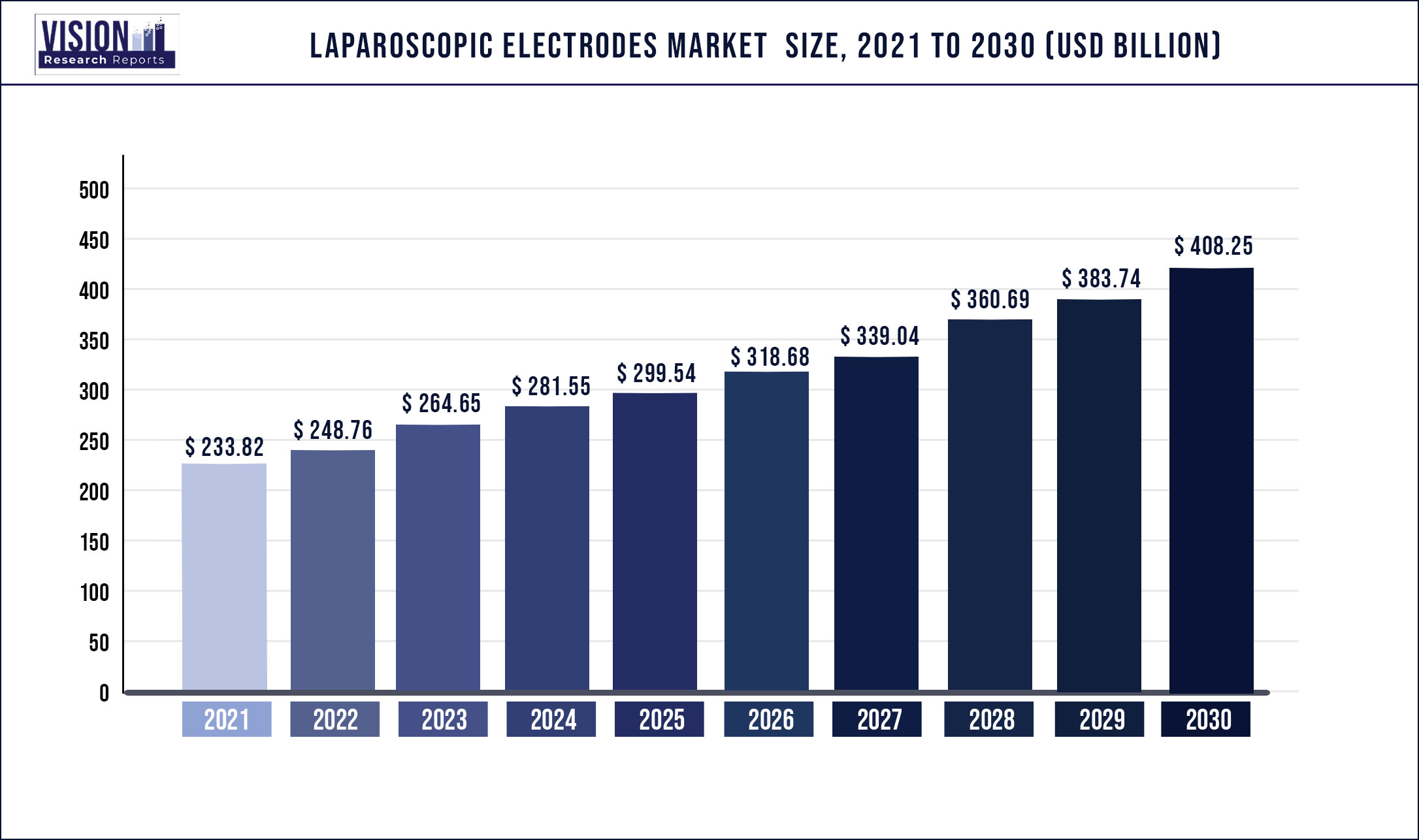 The primary growth-driving factors for the market growth include the adoption of minimally invasive surgeries along with the high usage of these devices in the diagnosis of several chronic disorders including cancer and others. The outbreak of the COVID-19 pandemic in the year 2020 had a negative impact on the market as the majority of elective laparoscopy surgeries were postponed to free-up limited space in healthcare settings to treat COVID-19 patients.

However, the European Society for Gynecological Endoscopy and the American Association of Gynecologic Laparoscopists issued guidelines to continue performing minimally/non-invasive surgeries with the adoption of specific care measures in case of emergency. In addition, the reduction in the COVID-19 impact and increase in medical device supplies across countries may collectively propel the market growth over the forecast period. An increase in the demand for minimally invasive surgeries is likely to boost the growth of the market during the forecast period.

This can be attributed to the increasing number of obese patients worldwide and the growth in the geriatric population. According to the American Society of Nephrology, urologic diseases are the third-most common concern among the geriatric population, and these account for approximately 47% of the physician visits. Minimally invasive surgeries have faster recovery time and are less time-consuming, and they attract a lot of consumer attention, hence rapid adoption of these surgeries is driving the market.

Based on the product, the market is categorized into monopolar and bipolar electrodes. The monopolar electrodes segment captured the largest market share of more than 53.00% in 2021. Increasing preference for minimally invasive surgeries, adoption of monopolar electrosurgery instruments by laparoscopic surgeons, and high prevalence of chronic conditions are some of the major factors responsible for the segment growth. Electrodes are an integral part of electrosurgical procedures. A wide range of these electrodes is available and is used based on certain variables, such as surgery objective and tissue types involved.

In addition, the frequent introduction of innovative monopolar hand instruments by key market players has augmented the segment growth. In October 2019, Apyx Medical Corp. (BOVIE MEDICAL) received the U.S. FDA approval to market Apyx Plasma/RF Handpiece, a single-use monopolar electrode for cutting, coagulation, and ablation of soft tissue. The device is an addition to the Renuvion product portfolio. Thus, the abovementioned factors are expected to fuel the market growth during the forecast period. The bipolar electrodes segment is expected to grow at the fastest CAGR from 2022 to 2030 owing to its growing applications in sensitive cases, including those pertaining to neurology, ophthalmology, and otolaryngology.

Moreover, the use of bipolar electrodes during electrosurgery significantly reduces the risk of patient burns. The rising frequency and incidence of diseases, such as colorectal cancer, are likely to fuel market expansion. For instance, colorectal cancer was the third-most frequent cancer in women and men, in 2020, according to the World Cancer Research Fund International, with around 1.90 million new cases reported. Colorectal cancer is most commonly treated with laparoscopic surgery. As a result, the rising prevalence of colorectal cancer is predicted to boost market growth over the forecast period.

The end-user segment includes clinics, hospitals, and ambulatory surgical centers. The hospital segment dominated the market with a share of more than 61.80% in 2021. The growth of this segment can mainly be attributed to an increase in the number of patients suffering from various chronic diseases and the consequent rise in surgical procedures. In comparison to other healthcare settings, hospitals see a significantly higher inflow of patients for bariatric surgeries or other laparoscopic procedures, owing to the ease of handling any emergencies that may arise during surgical procedures and the availability of a wide range of treatment options in such facilities.

For instance, according to the American Society for Metabolic and Bariatric Surgery, in 2019 alone, 256,000 people in the U.S. underwent weight-loss surgery. Thus, the aforementioned factors are expected to drive the hospital segment. Moreover, hospitals are the primary health system in the majority of countries; therefore, the number of laparoscopic surgeries done at hospitals is relatively high than in other healthcare settings, such as Ambulatory Surgery Centers (ASCs) or clinics. Thus, the demand for laparoscopic electrodes in hospitals is comparatively high than in other end-use segments. The ASCs segment is expected to grow at the fastest CAGR during the forecast period.

This is due to an increase in the adoption of minimally invasive surgeries, a high preference for outpatient surgeries, and the cost-effectiveness of ambulatory surgical center-based laparoscopic procedures. Lower post-surgical complications in minimally invasive laparoscopic surgery, on the other hand, are predicted to boost the demand for ambulatory surgery facilities. In comparison to hospitals, they provide patients with various benefits, including same-day release and faster procedure times. Because laparoscopic operations are less invasive, most intra-abdominal surgeries can now be performed at ASCs. As a result of the factors discussed above, the ASCs segment is expected to rise rapidly over the forecast period.

Thus, this segment is expected to witness a moderate growth rate over the forecast period. On other hand, the bariatric surgeries segment is expected to grow at the fastest CAGR during the forecast period owing to the increasing incidence of obesity in adults due to excessive intake of calories and changing lifestyle habits. For instance, according to the CDC, around 13.0% of the population (aged 18 years & above) are obese and 41.0 million children under the age of 5 years suffer from obesity.

North America dominated the global market in 2021 and accounted for the maximum share of more than 37.00% of the global revenue. Increasing dependence on laparoscopic surgeries compared to open surgeries is a major factor driving the market. In addition, competition among prominent players, related to product innovation, will also impact the market. Furthermore, surgeons are now recommending laparoscopy over traditional surgeries, as it allows for rapid healing and positive outcome. In addition, increasing healthcare expenditure in the U.S. may also favor the entry of both new and old players. For instance, as per the Centers for Medicaid and Medicare Services, U.S. healthcare spending increased by 9.7% & reached USD 4.1 trillion in 2020, accounting for approximately 19.7% of the GDP.

Asia Pacific is expected to be the fastest-growing market during the forecast period owing to a rise in the number of advanced, well-equipped hospitals and high volumes of surgical procedures. Singapore and South Korea are some of the emerging economies in the Asia Pacific regional market. Advancing technology, increasing investments, improving reimbursement scenarios, and growing medical tourism is likely to drive the Asia Pacific regional market. Other driving factors for the country are affordable devices, an increase in mergers & acquisitions, and government initiatives to improve healthcare services. The government has made significant investments to provide basic health insurance to all citizens.