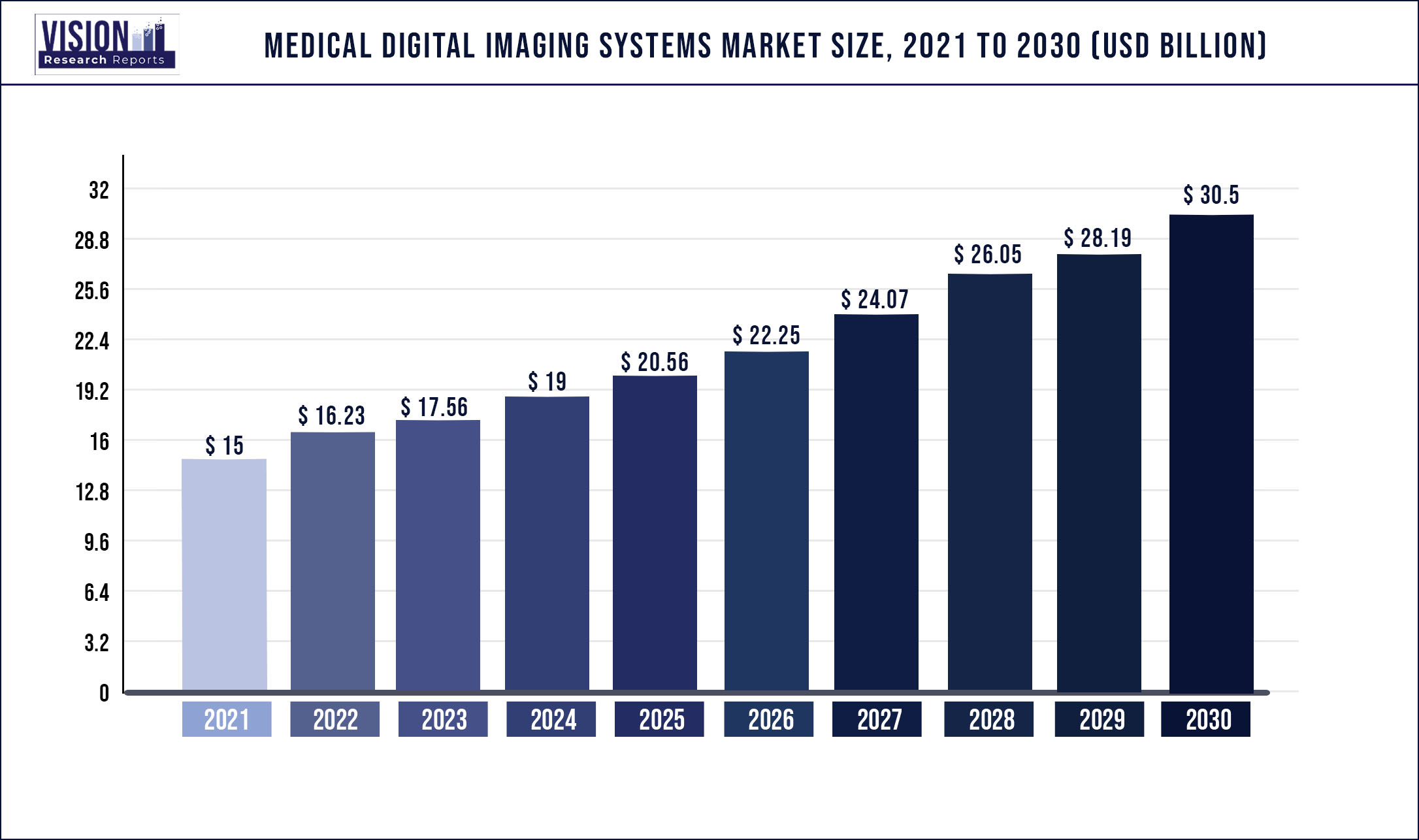 Growing demand for advanced imaging solutions with minimal errors and faster results is likely to drive the market during the forecast period. Expanding applications of medical digital imaging in preventive healthcare is poised to contribute to the growth of the market.

Some of the causes of chronic diseases are unhealthy diets, sedentary lifestyles, tobacco and alcohol consumption, and biological factors including dyslipidemia, hypertension, obesity, and hyperinsulinemia. Rising prevalence of various chronic diseases is projected to augment the medical digital imaging market during the forecast period.

Governments of countries such as U.S., U.K., India, and Canada are undertaking initiatives to boost the market. These initiatives are in various forms such as declining import duties for devices, providing favorable policies, and educating physicians & medical imaging device operators. The demand for diagnostic techniques has been increasing in the past few years owing to technological advancements in the field of diagnostics and rising awareness among people regarding early diagnosis of diseases.

Scope of the Report

Based on the products, the market has been segmented into X-ray, ultrasound systems, CT, MRI, and nuclear imaging. CT accounted for the largest share in the market in 2021 with a 25.2% share. Nuclear imaging is anticipated to be the fastest-growing segment during the forecast period. Development of new radiotracers, increasing prevalence of cancers and cardiovascular diseases, and the introduction of new products through advancements are working in favor of the overall market.

According to the American Cancer Society, 1,762,450 new cancer cases were reported in the U.S. in 2019. Development of radiotracers, such as Single Photon Emission Computed Tomography (SPECT) with technetium 99m radiotracers, which optimizes image quality with reduced radiation exposure, is estimated to contribute to the growth of the CT segment during the forecast period.

Based on technology, the global medical digital imaging systems market has been bifurcated into 2D and 3D/4D. 2D has been further divided into black and white (BnW) and color. 2D technology captured the largest share in 2017. The 3D technology is expected to witness the highest adoption rate in developed as well as developing regions.

Technological advancements in 3D/4D imaging technology helps in accurate and efficient real-time visualization of human body, thereby minimizing distortion for patients. 4D imaging is 3D with real-time movement. The global market for 3D and 4D devices is likely to experience lucrative growth in the forecast period owing to the increasing adoption of these technologies for fetal monitoring.

Asia Pacific is poised to exhibit the highest CAGR with 10.3% during the forecast period, mainly due to increasing government incentives and lower cost of clinical trials. Healthcare in the region is dominated by private healthcare services providers. The presence of international service provider companies such as Wockhardt Hospitals, Columbia Asia, and Fortis Healthcare is projected to boost level of competition in the private sector. Rapid growth in the medical tourism is anticipated to fuel the demand for advanced diagnostic methods in this highly competitive market.