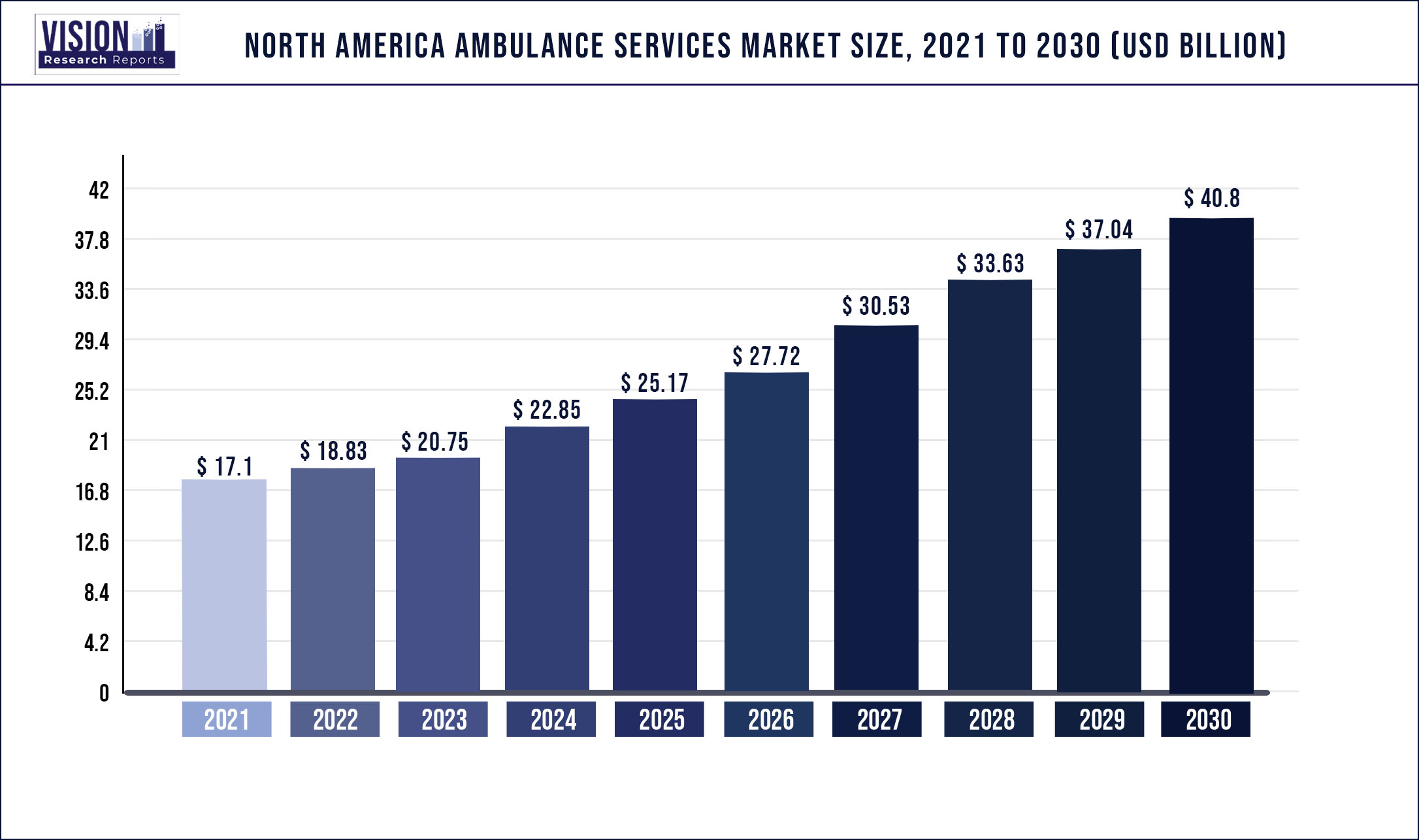 Rising incidence of chronic ailments such as cardiovascular disorders, diabetes, and cancer is a key factor expected to drive ambulance services market growth.

For instance, according to the American Heart Association, in January 2019, stroke is the leading cause of death in the U.S. approximately 2.7 million people in the country living with atrial fibrillation, and approximately 800,000 people experience a stroke each year due to a blockage in the blood vessel that supplies blood to the brain. Moreover, CDC states that 34.2 million people of all ages, or 10.5% of the US population had diabetes in 2018.

Furthermore, growth in the geriatric population and a surge in traumatic accidents are further driving the market growth. Additionally, there has been a constant increase in the number of traumatic accidents in this region. For instance, according to the National Highway Traffic Safety Administration estimates, in 2021, about 42,915 people died in motor vehicle traffic crashes, a 10.5% surge from the 38,824 fatalities in 2020. The industry is expanding due to favorable reimbursement regulations in developed countries.

In the U.S., Medicare covers both emergency and non-emergency ambulance services for medically necessary emergencies, provided the supplier satisfies certain criteria. In some circumstances, Medicare also covers unplanned and irregular non-emergency visits. Medicare pays approximately 80.0 percent of the cost of emergency services, with the remaining 20% paid by the patient's insurance coverage.

The ground ambulance segment dominated the market and held the largest revenue share of 48.87% in 2021. Vans, pickup trucks, cars, motorcycles, bicycles, all-terrain vehicles, golf carts, and buses are all examples of ground ambulances. The segment is anticipated to grow due to the rising number of occurrences of cardiovascular illnesses in this region. According to the CDC, one person in the United States dies of a cardiovascular disease every 30 seconds.

Furthermore, according to a similar source, 18.2 million persons in the U.S. aged 20 and up suffer from coronary artery disease. Similarly, the region's aging population is predicted to fuel segment expansion. According to Statistics Canada, the number of individuals aged 85 and over grew by 12% between 2016 and 2021. As a result of the foregoing, the ground ambulance sector is likely to dominate the ambulance services market.

The air ambulance segment is projected to witness the fastest growth rate of a CAGR of 11.19% over the estimated period. Air ambulances are critical transportation services in the event of medical crises. Air ambulances are outfitted with medical equipment and personnel to provide medical treatment while in flight, whereas non-medically equipped and staffed aircraft help carry patients and organs. These services provide convenience, flexibility, and safety, among other benefits. The rising prevalence of chronic conditions such as cardiac arrests and rising cases of accidents is fueling segment expansion.

In addition, the launch of new services and rising collaborations are further driving the segment growth. For instance, in December 2021, Life Flight Network and Life Link III, two independent hospital-owned, air ambulance programs signed a letter of intent to launch a strategic alliance. The collaboration is intended to implement best practices, process enhancement, quality initiatives, and safety. Thus, the aforementioned factors are anticipated to help the segment grow.

The emergency services segment dominated the market and held the largest revenue share of 61.17% in 2021. The segment is anticipated to witness a considerable growth rate over the forecast period. The growth of the emergency services segment can be attributed to the prevalence of cardiovascular diseases such as cardiac arrest, stroke, congestive heart failure, and rising cases of COVID-19 across the region.

Emergency ambulance services are provided to patients with acute injury or illness and to those who are in urgent need of medical attention. For instance, according to statistics by CDC, around 3.4 million people in the U.S. suffer from epilepsy. As per the same source, more than 795,000 people in the U.S. have a stroke annually. Furthermore, according to UC Davis Health, firearm-related incidents result in 39,707 deaths in the U.S. Similarly, as per the Government of Canada, the number of injuries tallied up to about 101,572 in 2020.

Thus, people suffering from emergency healthcare situations and various traumatic accidents are expected to boost the segment growth over the forecast duration. Nonemergency ambulance services are expected to witness a significant growth rate of a CAGR of 9.19% during the forecast period. Medically essential, pre-scheduled inter-facility services are provided by non-emergency services, which are the key drivers boosting the growth of the segment during the forecast period.

Nursing homes, hospitals, surgery centers, dialysis centers, and other facilities get non-emergency services. These services might be used for patient logistics, such as transporting a fragile patient from one location to another without moving the body. Many procedures need the patient to be in a stable state during the recovery phase. Moving such persons from one area to another necessitates medical competence, which only Patient Logistic experts have.

Along with ambulance services, a few firms offer patient logistics professionals to assist individuals in traveling without requiring mobility. Moreover, long-distance travel, special events, routine medical check-ups, neonatal transfer, and other scenarios can all benefit from the use of a non-emergency ambulance for safe and comfortable transportation. Thus, owing to varied usability, the segment is expected to witness sizeable growth.

The Advance Life Support (ALS) ambulance services segment dominated the market and held the largest revenue share of 64.08% in 2021. ALS ambulances are facilitated with vascular access, and cardiac arrest treatment equipment, nebulizer, large-bore needle, glucometer, medications, and pre-loaded needles, over and above the BLS equipment. Patients who require a greater degree of care during transport, such as those on a cardiac monitor, those who may have an airway difficulty, and pregnant women, necessitate an ALS ambulance.

Upsurge in the number of people suffering from cardiac arrest are anticipated to boost the ALS segment over the forecast period. For instance, according to the report published by The American Heart Association has released Heart and Stroke Statistics – 2022, there are more than 356,000 out-of-hospital cardiac arrests (OHCA) yearly in the U.S., of which nearly 90% of them fatal. Similarly, as per the Heart and Stroke Foundation of Canada data, an estimated 35,000 cardiac arrests and 62,000 strokes occur in Canada every year. The ALS provides patients with continuous cardiac monitoring and ventilator support along with an emergency medical technician.

Basic life support (BLS) is anticipated to have a growth rate of a CAGR of 8.87% during the forecast period. BLS ambulance services is utilized for patients with injuries or acute illness until they receive adequate medical care at the healthcare facility. Every ambulance is staffed with state-licensed emergency medical technicians. BLS ambulance services are generally equipped with ventilation and airway equipment, automated external defibrillators, immobilization devices, bandages, two-way communication devices, latex-free equipment, obstetrical kit, and injury prevention equipment, among others.

Most countries have a number of guidelines on various conditions for providing BLS. For instance, in the U.S., the American Heart Association's BLS protocol can be used by nonprofessionals and includes treatment for drowning, cardiac arrest, choking, and respiratory arrest. Furthermore, the rising incidence rate of acute illnesses such as asthma attacks, bronchitis, burns, heart attacks, and pneumonia will drive segment growth. For instance, as per the Asthma and Allergy Foundation of America Society, approximately 25 million people in the U.S. have asthma, i.e., about 1 in 13 people.

The U.S. dominated the ambulance services market and accounted for the largest revenue share of 89.46% in 2021. The growth can be attributed to factors such as the presence of several key market players in this region, growing demand for high-quality healthcare services, well-established healthcare infrastructure, and favorable reimbursement policies and regulatory reforms in the healthcare sector. For instance, in February 2019, the Center for Medicare and Medicaid Innovation (Innovation Center) of the U.S.

Department of Health and Human Services (HHS) introduced a new payment model for emergency ambulance services that intends to enable Medicare Fee-For-Service (FFS) beneficiaries to obtain the most adequate care at the right time and place while potentially lowering out-of-pocket costs. All of these reimbursement regulations make ambulance services accessible to the patient population, hence propelling the ambulance services market’s growth.

On the other hand, Canada is projected to witness moderate growth at of CAGR 5.55% during the forecast duration. Canada ambulance services market is expected to witness the fastest growth in North America over the forecast period. Rising geriatric population, increasing government funding, and rising healthcare expenditure are factors anticipated to boost ambulance services market in this country.

As per CIHI (Canadian Institute for Health Information), total health expenditure in Canada is anticipated to be more than USD 308 billion in 2021, representing 12.7% of Canada’s gross domestic product (GDP), following a high of 13.7% in 2020. In Canada, a major part of healthcare is publicly funded, which has led to advancements in healthcare and an increase in the number of patients undergoing treatment. These factors contribute to the growth of the ambulance services market.

Furthermore, the rising incidence of trauma, stroke and heart attack is expected to drive the demand for ambulance services. For instance, according to the Heart and Stroke Foundation of Canada, approximately 40,000 people suffer cardiac arrest outside of a hospital in Canada each year. Immediate medical attention and EMS are required in cases of cardiac arrest, which contributes to the growth of the ambulance services market in Canada.