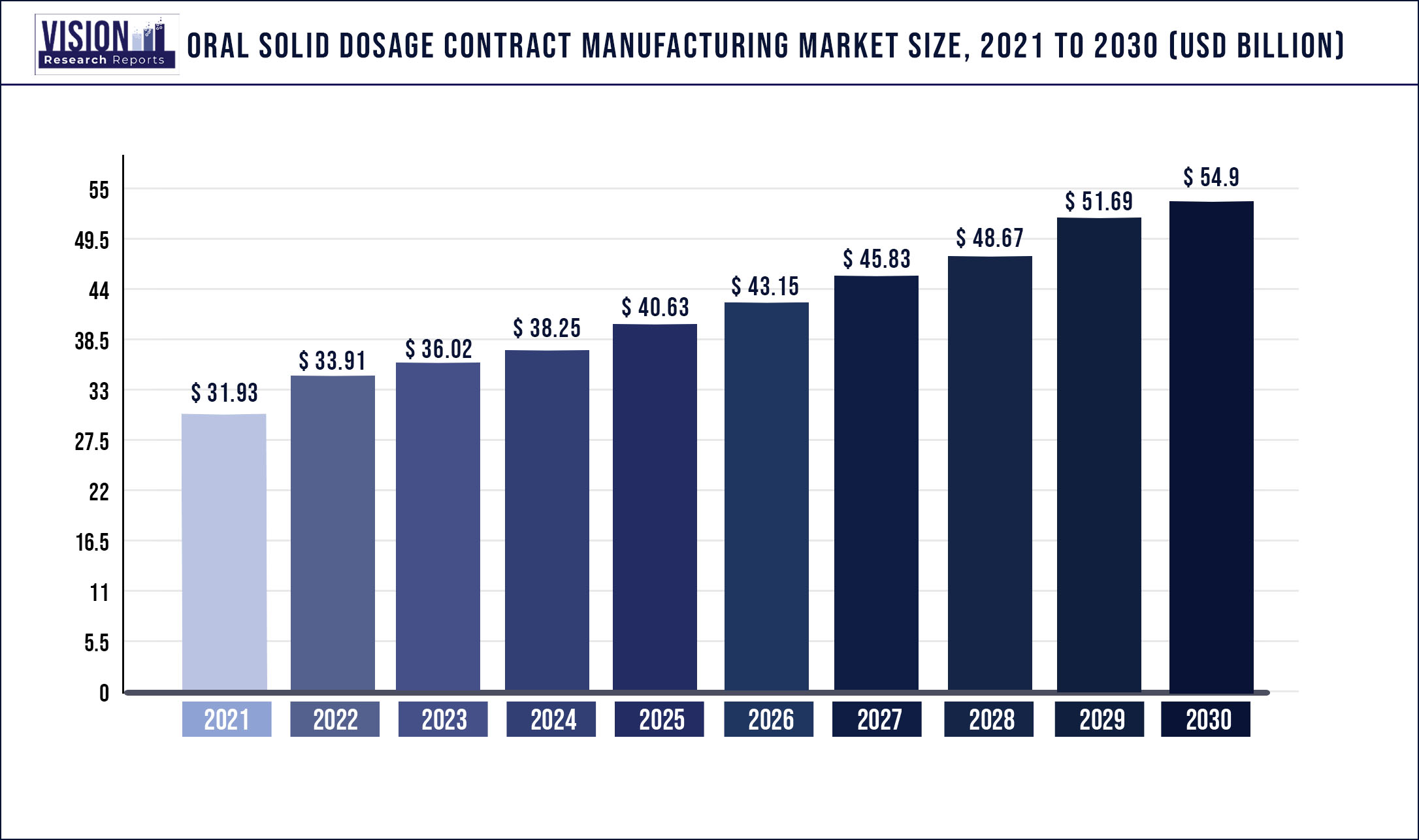 Increasing complexity of new drug molecules, R&D investments by large Contract Manufacturing Organizations (CMOs) & Contract Development & Manufacturing Organization (CDMOs), and rising demand for new therapies would drive the growth of the market. Oral solids are the most widely accepted dosage forms in the pharmaceutical sector as they are cost-effective, simple to manufacture, and patient-friendly. Furthermore, advances in drug delivery technology, such as the delivery of drugs and sustained release formation, are enabling oral solids to achieve even higher levels of bioavailability while lowering drug administration frequency.

The global market is growing in conjunction with the oncology sector. Clinical-stage cancer programs increased by 77% between 2015 and 2020 (1,642 to 2,911) and completely dominate the landscape, resulting in approximately one-quarter of drugs currently being developed globally being classified as highly potent. This tendency forward into high potency is having a significant impact on the CDMO space, as the increasing demand for smaller-scale and encapsulated manufacturing processes presents a challenge for most of pharma’s installed capacity. The COVID-19 crisis has had a number of short- and long-term consequences.

The healthcare sector witnessed a considerable decline in its revenue recognition during the year 2020 due to labor shortages and disruption of the raw material supply chain. However, drug sponsors are focusing on enhancing their efforts in the R&D of drug products that will help treat viral infection. Moreover, small molecule oral solid dosage (OSD) products, such as azithromycin and hydroxychloroquine, etc. have a positive impact on the COVID-19-infected population. Hence, an increasing number of manufacturers were focused on the commercialization and production of such OSD drug products, thus supporting the market growth.

Moreover, the industry witnessed a significant surge in 2020 and 2021, as a new and high number of CMOs were allocated with contracts of OSD as a potential treatment of the COVID-19 infection. For instance, in August 2020, Pfizer Inc. announced an agreement with Gilead Sciences, Inc. to provide contract manufacturing services for the supply and manufacturing of Gilead’s investigational antiviral remdesivir drug, with an aim to scale up the supply of the investigational treatment for COVID-19 patients. Hence, such factors are supporting the demand surge of OSD products across 2020 and 2021.

The tablets segment dominated the OSD contract manufacturing market in 2021 and accounted for the largest share of 32.7% of the global revenue. Tablets are the most common OSD form. This form contains an Active Pharmaceutical Ingredient (API), which is also known as a dry powder ingredient and a drug substance. Compression is used to form tablets, which can be coated or uncoated. The pharmaceutical companies have a preference for tablets as they are simple to make, package, & transport, have good physical & chemical stability and allow for simple and accurate dosing. Various coating processes supposedly enable them for the adjustment of API release profiles, and also for the cosmetic modification of tablet color and shape. In addition, sugar-free gummies made from fruit and plants are gaining popularity in developed countries.

Europe remains a key market for soft gelatin capsules. The capsules segment is expected to register the fastest CAGR over the forecast period and is the second-most lucrative dosage form in the market. Capsules are a widely known oral dosage formulation that is common among both pharmaceutical companies and consumers. While buyers comprehend the tasteless and easy-to-take capsules, the pharmaceutical industry appreciates the streamlined development timelines and manufacturing simplicity. They are solid preparations that contain drug substance(s) and/or excipients within a soft or hard soluble shell. The shell is typically made of gelatin or another appropriate polymeric material, resulting in a simple, tasteless, odorless, elegant, and easy-to-swallow dosage form that does not require a second coating step.

Based on mechanisms, the market has been categorized into Immediate-release, delayed-release, and controlled-release. The controlled-release mechanism segment accounted for the maximum revenue share of the global market of more than 51.5% in 2021. The segment is also anticipated to register the fastest growth rate during the forecast period. Controlling the rate and/or location at which an API is released allows drug designers to develop medicines that are softer on patients while remaining effective. Controlling the release of the API excludes fluctuations in drug plasma levels, which usually results in fewer side effects, and it also allows for a decline in the number of doses required per day.

The large size companies segment led the OSD contract manufacturing market in 2021 and accounted for the maximum share of more than 54.5% of the global revenue. Large pharmaceutical companies outsource OSD manufacturing.Quality and reliability are consistently taking the top two positions, but priorities diverge from there. Big pharma ranks productivity second, followed by regulatory, affordability, and innovation. With different reasons for outsourcing, the large pharma companies have differently preferred CMOs for OSD manufacturing. Next Pharma and Catalent, on the other hand, rank in the top three in two buyer categories.

Boehringer Ingelheim, Next Pharma, and AMRI are Big Pharma’s preferred CMOs in descending order. The medium- & small-size companies segment, on the other hand, is poised to witness significant growth over the forecast period. The high growth of the segment is majorly due to the increasing number of small- and medium-sized companies outsourcing their production work to contract manufacturers. The outsourcing of drug manufacturing is a popular option for many medium- to small-scale drug developers that may not incorporate the essential infrastructure to develop small molecule APIs and reference standards. Such organizations can fast-track development and reduce their R&D costs by outsourcing the production work to CMOs.

Asia Pacific is projected to be the fastest-growing regional market with a CAGR of 6.4% over the forecast period. The region also accounted for the largest market share in 2021. India and China are OSD CMO market powerhouses in the APAC region, with significantly lower prices. Due to increasing patent expiration, generic drug manufacturing is the APAC region’s second-largest revenue source. CMOs are also continuing to pursue ISO certification in the areas of environmental management, quality management, and energy consumption. Moreover, though the number of warning letters has decreased in established markets, it has increased in Asia Pacific, and the majority of recalls have been caused by violations of cGMP manufacturing standards.

Asia has been providing low-cost alternatives to North American and European CDMOs, which rely on a one-stop-shop model to counter that threat. North America is the second-most lucrative region due to investments by regional companies and increased drug approval by FDA. For instance, in the U.S. alone, the FDA approved 50 novel drugs in 2021, 22 of which were tablets or capsules. The U.S. continues to dominate the OSD CMO market mainly due to developed healthcare industry, government focus on generics, and greater availability of funds.However, recent advances in drug delivery have enabled North American OSD manufacturers to achieve substantial bioavailability through the use of new drug delivery platforms. This is expected to increase the demand for oral controlled-release drug delivery technology in the region.