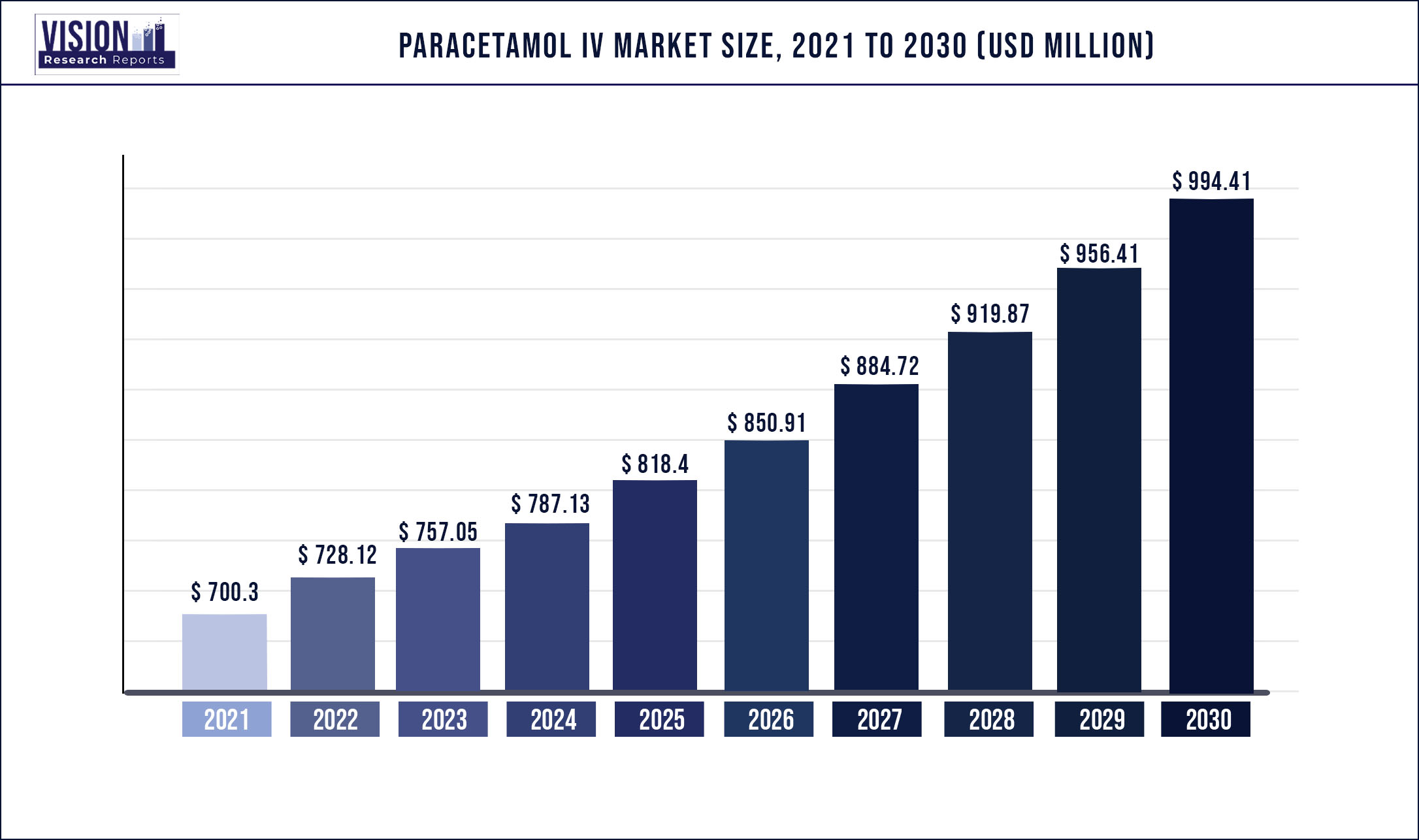 The rising prevalence of chronic disorders that requires pain management is expected to facilitate the growth of the industry during the forecast period. The enhanced usage of acetaminophen to reduce the dependence on opioids for pain management is projected to accelerate the growth in demand for paracetamol IV. The IV paracetamol is a stable acetaminophen form and is intended for mild to moderate pain management. It is used over other NSAIDs to treat patients with a history of peptic ulcers and asthma, as it lacks interference with the function of platelets.

For instance, in December 2020, Sandoz International GmbH launched a generic acetaminophen injection in the U.S. The product will be available in 10 mg/mL concentration, in a 100 mL vial for the treatment of mild to moderate in conjunction with opioid analgesics for pediatric patients. Key players operating in the global industry are following various strategic initiatives for business expansion and to gain a competitive edge over others. For instance, in December 2021, Leucadia Pharmaceuticals launched and announced the availability of a generic acetaminophen injection, which is an FDA-approved generic that corresponds to the acetaminophen injection manufactured by Mallinckrodt Pharmaceuticals.

Based on indications, the global industry has been further bifurcated into pain and pyrexia (fever). The pain indication segment dominated the global industry in 2021 and accounted for the maximum share of more than 67.03% of the overall revenue. The high share of this segment was attributed to the effectiveness and rapid action of paracetamol being administered intravenously in pain management. A single dose of paracetamol given intravenously is effective in relieving pain for around 4 hours for about 37% of patients with acute post-operative pain. Moreover, paracetamol IV is effective and safe for the treatment of postoperative pain in both children and adults.

This, in turn, makes it more feasible to be used for a large patient pool. In addition, the product is considered a first-line treatment for acute pain and chronic pain as it is a non-addictive pain treatment. On the other hand, the pyrexia (fever) indication segment is projected to expand at the fastest growth rate during the forecast period. This can be attributed to the acceptance of paracetamol IV as the first line of treatment for fever and pain in pediatric patients. With the increasing pediatric population, the usage of paracetamol through infusion is also rising. However, the product is only used for short-term treatment, which, in turn, limits its adoption.

Based on applications, the global industry has been further categorized into surgical and non-surgical. The surgical application segment dominated the global industry in 2021 and accounted for the maximum share of more than 63.55% of the overall revenue. The high share of this segment can be credited to the increased usage of paracetamol IV for the treatment of post-operative pain and quicker relief from fever. After surgery, most patients go through acute and mild pain, which, in turn, requires early treatment. With the increasing volumes of surgeries performed and the need to provide relief within a short duration of time, the adoption of paracetamol IV is projected to rise.

On the other hand, the non-surgical application segment is expected to register the fastest growth rate during the forecast period. The fastest growth of the non-surgical segment can be attributed to the increasing awareness among the population about the treatment of discomfort and fever-related symptoms. A wide range of paracetamol IV products is available in syringe form, which makes it easy to use and offers a quick effect. For instance, a liquid injectable form comprising acetaminophen, hydroxyethyl starch, and at least one osmolality agent is widely accepted as an infusion.

Based on end-uses, the global industry has been further sub-segmented into hospitals, clinics, and others. The hospitals end-use segment dominated the overall industry in 2021. The segment accounted for the maximum share of more than 52.47% of the global revenue in the same year. It is projected to expand further at a significant growth rate during the forecast period maintaining its leading position. The dominance of this segment can be attributed to the increasing number of surgeries carried out in hospitals on account of the presence of qualified and specialized healthcare professionals.

The need for rapid relief from post-operative surgeries is further driving the growth of the segment. The clinics end-use segment is expected to account for the second-highest revenue share by 2030 on account of the increasing cases of short-term treatment of fever during urgent need to induce hypothermia. There is a high demand for treatments in clinics due to the easy access for remotely located patients. Moreover, the rising number of technological advancements and adoption of types of equipment in clinics is further spurring the growth of the segment.

North America dominated the global sector in 2021 and accounted for the maximum share of more than 40.23% of the overall revenue. The dominance of the market is attributed to the popularity of paracetamol IV as it is one of the most frequently used medications with sales surpassing millions of doses every year. The formulation is highly used in hospitals and healthcare systems to treat patients with acute to mild pain. The use of the intravenous drug in emergency surgery, cohorts where the risk of morbidity can be reduced by adequately maintaining hemodynamics is further fueling the growth of the sector in this region.

Asia Pacific, on the other hand, is projected to grow at the fastest CAGR during the forecast period on account of the increasing prevalence of chronic diseases, rapid growth in the geriatric population, and the presence of key industry participants. Moreover, high product demand, due to lower costs associated with the drug and quick relief offered in postoperative pain, will drive the region’s growth over the coming years. For instance, according to the UNFPA, the older population in Asia is rising at an unprecedented rate, and it is expected to triple reaching 1.3 billion by 2050. Key players in the region include Cipla Inc., Sun Pharmaceutical Industries Ltd., and Lupin.