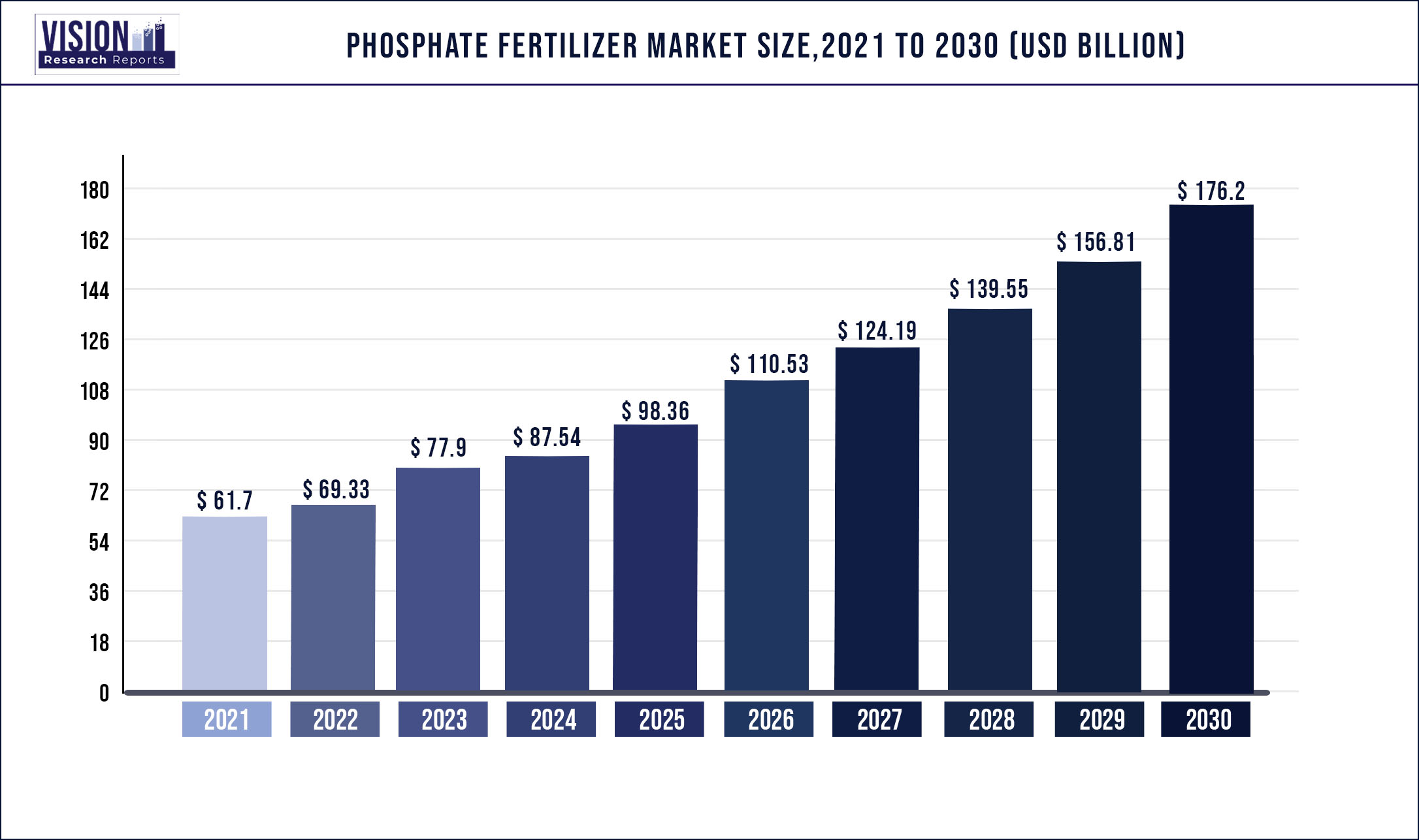 Growth can be attributed to increasing demand for fertilizers for usage in agricultural applications and is expected to drive the growth of the market during the forecast period.

Governments of major agrarian economies such as Brazil and India support the use of the product to improve crop yields. This has encouraged farmers and local entrepreneurs in these countries to increase the consumption of phosphate grades. In 2020, amid the COVID-19 pandemic, the prices of primary raw materials such as ammonia and sulfur increased sharply owing to supply restrictions and refinery curtailments.

The Asia Pacific is expected to register significant growth in the coming years owing to the agriculture, food, and horticulture industries as they are the key sectors for economic development, accounting for a substantial GDP share.

The monoammonium phosphate segment accounted for the largest revenue share of around 31% in 2021. This is attributed to the low costs of MAP and the high level of phosphorous present in it. MAP is the most important phosphate fertilizer as it as it is a vital source of nitrogen and phosphorus. In agricultural applications, it has been used as an important granular fertilizer. It is used either directly or as a raw material for manufacturing numerous complex fertilizers such as nitrogen phosphate and nitrogen-phosphate-potassium owing to its water solubility.

Triple superphosphate was the second-largest product segment in 2021 accounting for around 17% of the revenue share. It is a highly concentrated phosphorus fertilizer containing approximately 46% of diphosphorus pentoxide. The increasing demand for TSP from the global agriculture industry is a major factor contributing to the growth of the TSP segment of the market during the forecast period.

Other products include DAP, SSP, and others. DAP is also used in several industrial processes such as metal finishing. It is commonly added to milk to produce cheese cultures, as well as to wine for sustaining yeast fermentation. DAP also acts as a fire retardant. With the increasing demand for agriculture in emerging economies such as Brazil and India, the demand for DAP for use in agricultural applications is anticipated to increase over the forecast period.

The cereals & grains application accounted for the largest revenue share of around 46% in 2021. The growth is attributed to the increasing demand for major cereals & grains worldwide on account of the growing population has led to high demand for phosphorous fertilizers across all developing as well as emerging agrarian economies of the world.

The oilseeds & pulses segment accounted for the second-largest market share and is anticipated to expand at a 5.6% CAGR over the forecast period in terms of revenue. This is attributed due to the increasing demand for various agricultural products, including soybean, groundnut, sesame, and sunflower, among other products, in these regions. The product promotes the growth of plants and is proven to be most effective for the cultivation of a wide range of oilseeds & pulses.

The use of the product in seed treatment is considered highly effective for the growth of fruits and vegetables, including onions, tomatoes, chilies, and other crops. Their application in cultivation ensures increased food production, improved seed development, plant maturation, and root development

Asia Pacific region accounted for the largest revenue share of more than 61% in 2021. This is attributed to the growing food production and increasing demand for food products like rice and vegetables from import-dependent countries of Asia Pacific. Additionally, the agricultural sector is the backbone of the Indian economy as it provides employment to 50% of the workforce and contributes about 18% to the country’s GDP. The major crops grown in India are wheat, rice, pulses, spices, and spice products. India is one of the fastest-growing markets for agro-based industries. Due to this, the demand for the market is expected to increase over the forecast period.

Europe was the second-largest regional segment in terms of revenue in 2020 and is anticipated to expand at a CAGR of 6.1% in the coming years. This is attributed to the agriculture production of the countries in the region, Germany is among the fourth largest agricultural producers in the region and France is the sixth-largest producer, accounting for almost 1/3rd of the total agricultural land within the European Union.