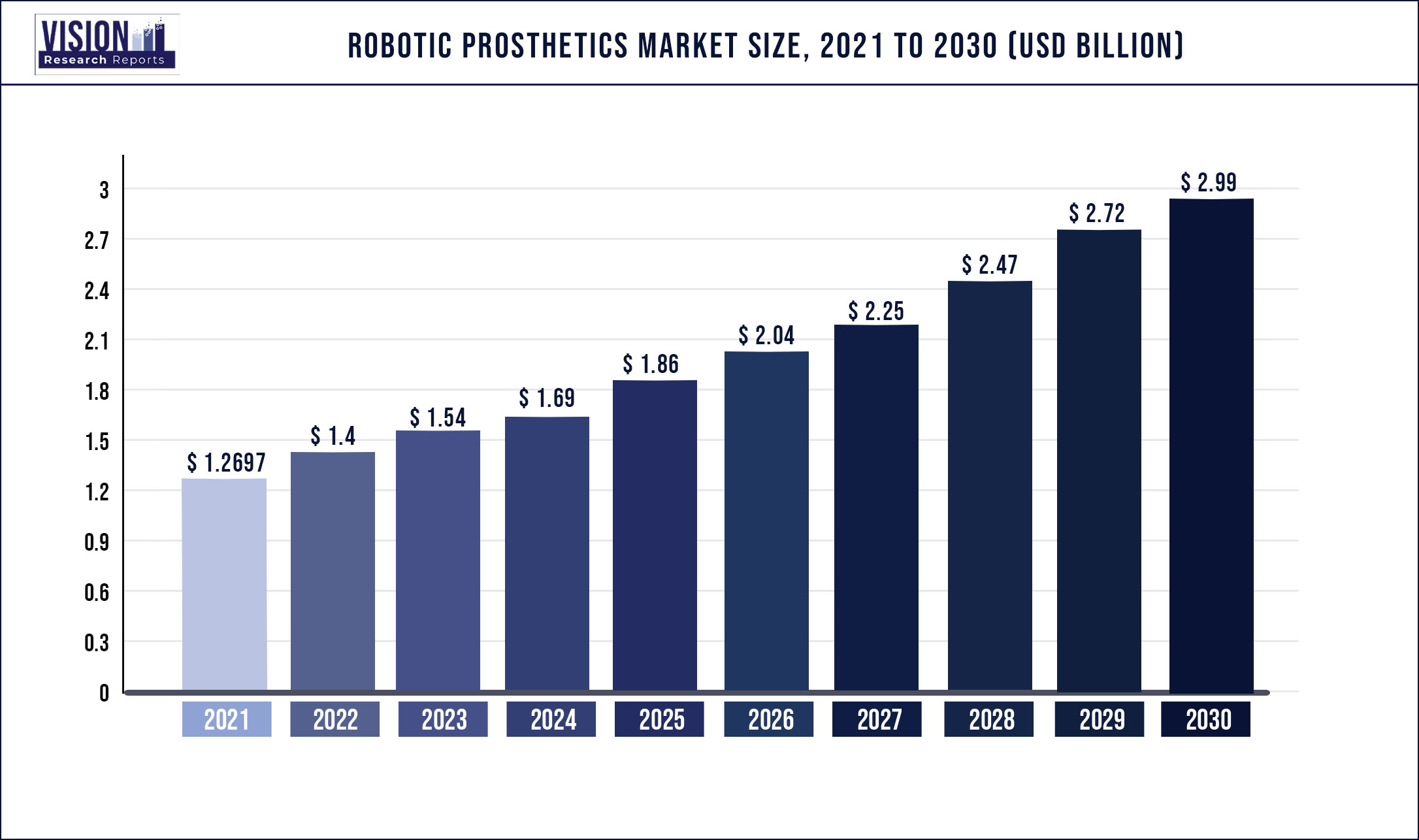 Robotics is an ever-evolving field with constant ongoing innovation. The increase in the number of people needing robotic prosthetics worldwide due to both traumatic as well as non-traumatic injuries has led to the massive expansion of the market. The Amputee Coalition estimated the number of people undergoing some form of limb loss will be over 3.5 million by 2050. Furthermore, the growing prevalence of diseases like diabetes and peripheral arterial disease are among major contributors to the increase in the number of amputations being performed on a global level.

The increasing number of people suffering from chronic ailments like diabetes is alarming. According to WHO, over 422 million people, worldwide suffer from this disease, majority of which are from the low and middle income countries. The Amputee Coalition states that people who undergo lower extremity amputations will require second amputation within 2 to 3 years of the first amputation, a total of 55% people will need second amputation due to diabetes, this has thus created a space for the market of robotic prosthetics for people with amputations caused due to diabetes.

Continually evolving technology in the robotics space has been a major driving force for the market. Use of better materials to build prosthetics is also contributing significantly to the advancements. Companies are delving into cutting edge technologies like the bionic prosthesis which are controlled by mind and muscle. The key market restraint in this is the cost of such prosthetics. Many companies have rolled out bionic prosthetics which are surgically attached to the bone, muscle and nerves. For instance, Ottobock an industry leader has a range of myoelectric prosthesis which are capable of mimicking natural hand movements.

The technology segment was dominated by the microprocessor controlled prosthetic segment, with a market share of 57.7% of the market in 2021. This system has better stability, provides better functionality of the artificial limb over conventional mechanical prosthetics. Their ease of use and adaptability are among major drivers for growth of this technology. However, the myoelectric prosthetics are poised to register substantial growth during the forecast years. This is due to the fact that myoelectric prosthetics are more natural, have higher human-like movements and are capable of providing touch, hold and grasp functions. Constant innovation in the use of AI for building more human-like prosthetics is driving this segment as well as the overall market.

As per regions, North America topped the charts with 43.0% of the market share. The technological advancements and availability of resources is high in the region which is one of the prime factors behind the staggering share of the global market. Higher capacity to spend on healthcare as well as high expenditure on healthcare by the government is also responsible for the market to make such progress in this region. The presence of key players in the industry and several R&D activities being performed in the field of robotics by corporations and institutes are also positively affecting the market. The APAC region is poised to witness the fastest growth, this can be attributed to improving healthcare infrastructure, advancing technology as well as high prevalence of chronic ailments. The region’s low and middle-income countries are major markets for robotic prosthetics.

The general economic slowdown during the COVID-19 pandemic also impacted the robotic prosthetic industry, adversely. The cross-border trade restrictions, higher costs of shipping, raw materials, etc., were driving down the market. It is however expected to pick up as the restrictions are lifted and normalcy sets it. The advancements in the field of robotics in healthcare have also had a huge impact on the growth of the market.

Myoelectric prosthetics are however poised to grow significantly over the forecast period. This new technology where-in the prosthesis is controlled by mind rather than mechanically, is the new rage, many companies and institutes are continuously improving the technology to bring out the best version of a truly bionic prosthesis. These are much nearer in terms of mimicking the natural movement of limbs as compared to mechanical or even microprocessor prosthetics. A number of companies have developed myoelectric prosthetics with currently available technologies which offer wider range of movements and a better quality of life. For instance, In September 2021, Steeper introduced a myoelectric system which includes Myo Kinisi hand which is easy to control along with auto grip function providing amputees to grip or hold objects much more efficiently.

The leading non-traumatic amputations were due to diabetes (over 26%) and vascular diseases (over 10%). The growing demand for prosthetics in the geriatric population manages the growth of the market. The global geriatric population is on a staggering, all time high, a total of 727 million people were aged above 65, as of 2020, as per a report by WHO. The older generation in need to replace limbs with prosthetics to improve quality of life and over functionality has been driving the growth of the market.

North America accounted for the largest market share of 43.0% of the global robotic prosthetic market as of 2021. The region’s development status as well as availability of modern and advanced technology, presence of large players in the market and increasing number of R&D activities in the field are all significantly contributing to the growth of this region. Furthermore, initiatives taken by the government to provide its veterans with prosthetics has also promoted considerable growth. Presence of companies pioneering in the field of robotics is also a key driving factor. Sarcos Robotics, a U.S. based company involved in development of highly advanced robotic systems which use AI, also creates wearable technology and has recently received funding for its R&D activities, amounting over USD 95.0 million.

Asia Pacific region is expected to grow at the fastest pace owing to the growing economy of the region’s countries, growing geriatric population as well increasing number of amputations in the low-middle income countries in the region. A study published in Prosthetics and Orthotics International revealed that the highest number of traumatic amputations were done in the East and South Asia regions. Above mentioned factors are key factors responsible for the growth of robotic prosthetic market in the region.