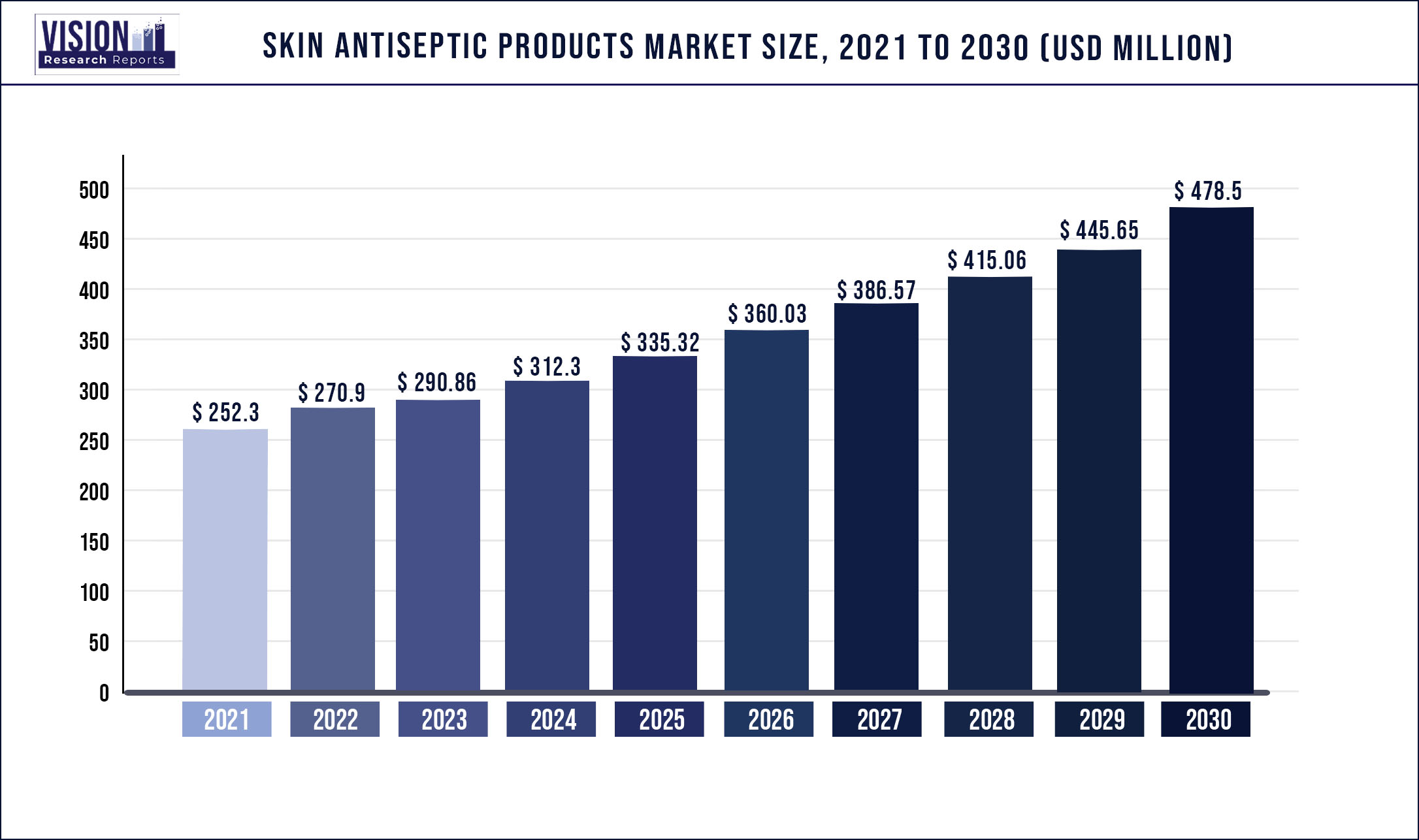 Rising incidences of Hospital-Acquired Infections (HAIs) and increasing usage of surgical units and endoscope reprocesses are the key driving factors for the market. The rising number of surgeries being performed is also expected to drive the market during the forecast period. According to the Agency for Healthcare Research and Quality (AHRQ), 17.2 million hospital visits included surgical procedures in the U.S. in 2014.

The alcohols segment dominated the skin antiseptic products market in 2021, owing to increasing usage for pre-injection and pre-operative skin preparation. Furthermore, the growing demand for alcohol base to be used in combination with other formulations, such as iodine and chlorhexidine, is fueling the segment growth. In addition, alcohol skin antiseptic products comprise antiseptic agents, such as isopropyl or ethyl. These are effective against numerous microbes.

The octenidine skin antiseptic products market is anticipated to witness the fastest growth of 7.5% during the forecast period. It is an internal substitute for chlorhexidine and iodine skin antiseptic products. Moreover, in countries such as the U.S., the FDA has restricted the use of chlorhexidine & iodine. This may help in the growth of the market for alternatives such as octenidine.

Based on the type of skin antiseptic products, solutions were the highest revenue-generating segment with a market share of 48.44% in 2021. This can be accredited to the high prevalence of hospital-acquired infections & SSIs and the easy availability of numerous solutions in the market. Moreover, growing awareness and increasing applications of antiseptic solutions in pre-operation and pre-injection skin preparation are impelling the market. Antiseptic solutions significantly reduce the contamination risk and transmission of infections.

In addition, rising cases of hospital-acquired infections have led to a growth in the usage of antiseptics for surgeries. For instance, as per NCBI, approximately, 1.7 million hospitalizations initiate hospital-acquired infections annually.  Similarly, according to an article by European Center for Disease Prevention and Control in 2018, around 8.9 million HAIs were estimated to arise every year in European long-term care facilities and hospitals. Therefore, due to the above-mentioned factors, the solution segment is predicted to witness significant growth throughout the forecast period.

However, the wipes segment is anticipated to witness the fastest CAGR of 7.2% during the forecast period. Wipes are easy to use, which helps in film and tape adhesion. Furthermore, wipes are extremely effective for wound application, as they completely clean the wound area, leaving behind no residue.

The injection segment dominated the skin antiseptic products market in 2021 with a market share of 90.17% and is anticipated to witness the fastest growth throughout the forecast period. The growth of the segment is attributable to the increasing use of joint injections for extracting fluid from swollen joints for injecting medicines. The growing geriatric population and individuals suffering from joint injuries and sports-related wounds respectively are the primary users of these injections. Furthermore, joint injections carrying zero side effects are gaining popularity among patients, which is again expected to expand the market considerably during the forecast period.

The surgeries segment is anticipated to witness a significant CAGR of 6.5% during the forecast period. The growth rate can be credited to the globally rising number of surgical cases. For instance, as per the Aesthetics Society, 252,022 breast augmentations, 296,601 liposuctions, and 163,073 abdominoplasty surgeries were recorded in the year 2020, thus helping the segment growth.

North America dominated the global skin antiseptic products market in 2021 and is expected to lead the market throughout the forecast period. The rising number of surgeries in this region is one of the major drivers positively impacting the market growth. Preoperative skin preparation is one of the essential steps adopted by surgeons before surgical treatments. Thus, the demand for skin-antiseptic products is anticipated to rise with the increasing rate of surgical actions.

Asia-Pacific skin antiseptic products market is expected to witness the fastest growth rate of 7.4% during the forecast period. Increasing healthcare expenditure by the public and private sectors is one of the major driving factors for the market. Such a scenario is anticipated to encourage several major and local players to enter in the market, due to which growth is expected.