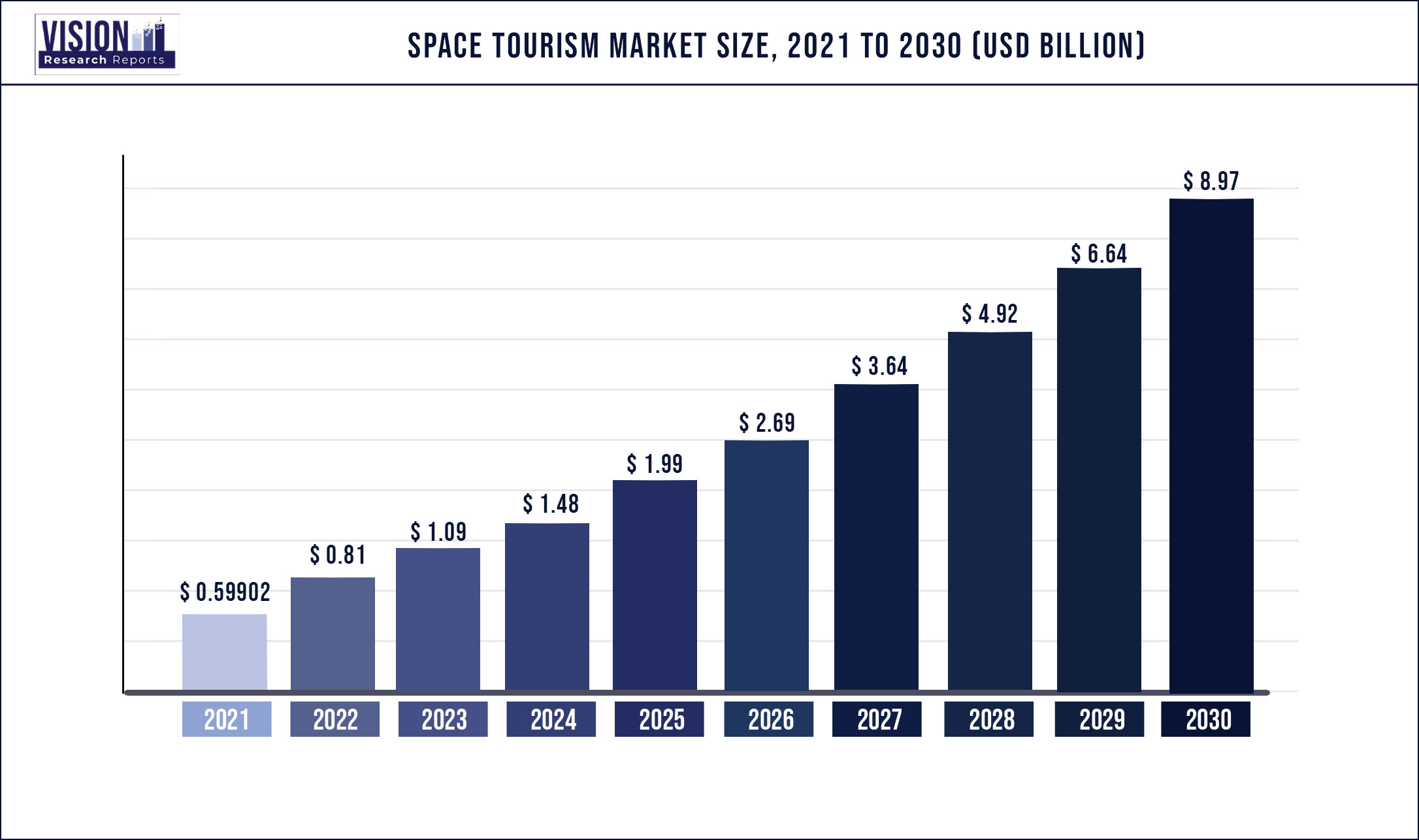 Space tourism is defined as human space travel for recreational, leisure, or business purposes. A high-net-worth individual seeking a unique experience is willing to pay for space tourism, increasing demand for space tourism.

As space technology research, development, and commercialization accelerate, space tourism is becoming a solid commercial pillar of the space industry. Only a few governments and private players have recently entered the market, with the Russian government consistently expressing interest in developing space tourism capabilities. In January 2021, Glavkosmos, Roscosmos' commercial arm, announced that it would sell four seats on the Soyuz MS spacecraft, with launches scheduled for 2022 and 2023, respectively.

Space tourism is expected to allow more space research, making space science more accessible to individuals. Since space is costly at the moment, these flights will offer a much lower cost to do some research. Space tourism will also help in making new technologies. More space science implies new inventions, and most technologies are based on the transformation that started in space. Running shoes, bulletproof vests, foam mattresses, etc., are a few of the technologies we got from a space visit to the moon.

Space tourism is harmful to the environment. In general, rocket launches are detrimental to the environment. Rocket engines, burning rocket fuels, release black carbon (soot particles) and harmful gases into the upper atmosphere, resulting in ozone depletion. However, a few space companies do not use black carbon for fuel. Companies like Blue Origin’s New Shepard uses liquid hydrogen-fueled gases in rockets. Hydrogen turns into water vapor when burning and does not emit carbon.

The reason why space tourism can be harmful to the environment is its potential popularity. As rocket launches are rising, carbon footprints will also increase. The company, Virgin Galactic is planning to launch 400 flights annually. The black carbon released by 1,000 space tourism flights results in a one-degree Celsius increase in the temperature of Antarctica.

A few companies working in space tourism are SpaceX, Airbus Group SE, Blue Origin, Boeing, ZERO-G, Virgin Galactic, and Axiom Space. In March 2022, Blue Origin launched its suborbital vehicle, New Shepard, on its first flight of the year, which carried six people on a short-term trip to space and back. The launch was deferred for nearly one hour by several countdown holds, including one that continued for more than 45 minutes. Later, Blue Origin said they required the time to work out a problem with the radio system on the vehicle that networks telemetry.

In terms of type, the market is classified into orbital, suborbital, and others. The sub-orbital segment dominated the overall market, gaining a market share of 49.64% in 2021 and witnessing a CAGR of over 36.11% during the forecast period. Suborbital tourism allows individuals to experience weightlessness and observe space without actually exiting the Earth's orbit. This enables human spaceflight to reach the edge of space without sending the vehicle into orbit.

The orbital segment is anticipated to witness the fastest CAGR of 38.05% throughout the forecast period. Orbital flights can last for a few days or several weeks, depending upon the destination, such as the International Space Station (ISS), the moon, or Mars. Companies, including Virgin Galactic and Blue Origin, primarily focus on launching suborbital flights, whereas SpaceX and Orion Span aims for orbital flights.

For instance, Orion Span, a U.S.-based space travel company, is planning on deploying a private commercial space station that is expected to function as a space hotel. The Aurora Space Station will be placed in Low Earth Orbit (LEO) and will host up to six tourists at once.

The commercial space tourism market is expected to dominate in 2021, gaining a market share of 56.89%. It is expected to grow at the fastest CAGR of over 37.04% throughout the forecast period. In 2021, there were thirteen commercial spaceflight missions undertaken by several private and government organizations, of which seven missions were executed successfully.

Billionaires have invested considerable sums in traveling to space and witnessing the Earth from above. Virgin Galactic, Blue Origin, SpaceX, and NASA have undertaken spaceflight missions to transport non-astronaut individuals across space and bring them back to Earth after a certain period. These explorations have achieved several milestones, including the first feature film shot in space and the oldest person to go to space.

The government segment is anticipated to grow at a considerable CAGR of 37.21% throughout the forecast period. Space agencies and global government organizations have sent astronauts into space, and NASA has opened the ISS for non-astronauts. NASA has entered into a three-way partnership with Axiom and SpaceX to commercialize space tourism in Low Earth Orbit.

In April 2022, NASA, Axiom, and SpaceX launched three civilians and a former NASA astronaut to the ISS in a SpaceX Dragon spacecraft. The week-long travel has cost USD 55 million each, and these individuals have conducted scientific research, outreach, and commercial activities.

North America led the overall market in 2021, with a market share of 38.55%. The region is equipped with a highly developed infrastructure and owns an extensive research and development base, allowing the region to be the top revenue contributor in the worldwide market during the projected period. A well-established infrastructure has allowed the speedier implementation of modern technologies.

The significant presence of small and medium players in North America, which offer components and services to the giants such as SpaceX, Blue Origin, and Virgin Galactic, has also propelled the market growth. The U.S. is expected to retain its dominance over the forecast period owing to the inclination of high-net-worth individuals towards space tourism and growing technological investments in the region.

The Asia-Pacific is expected to develop substantially by the projection period and grow at a CAGR of 37.73%. Significant contributors to the growth of the Asia-Pacific market include the China National Space Administration (CNSA), the Indian Space Research Organization (ISRO), and Japan Aerospace Exploration Agency (JAXA). CAS Space, a Chinese Academy of Sciences (CAS) spinoff, has been developing rockets for commercial satellite launches.

The company aims to launch a demo flight in 2022, a full suborbital flight in 2023, and tourists in space by 2024. As per a survey conducted by the Chinese University of Hong Kong, young Chinese respondents have expressed more substantial interest in space tourism and space hotels when compared to American respondents. The Chinese respondents were willing to spend USD 1.6 million for a round trip to Earth, whereas the American respondents were willing to pay USD 0.9 million for the same.