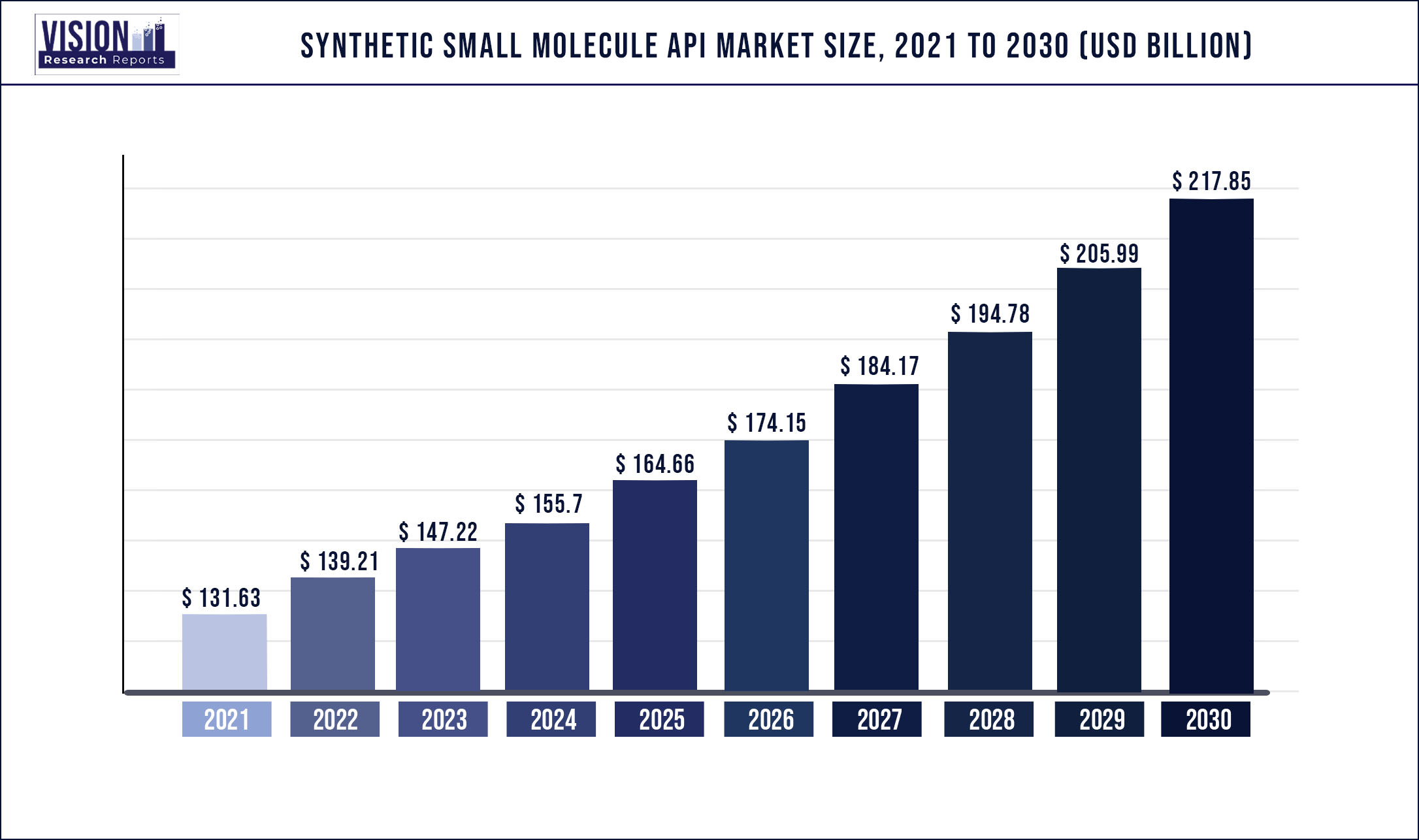 This can be attributed to the increasing demand for pharmaceuticals and new small molecule-based drugs globally. Moreover, small molecules API offers versatility between dosage forms and has an easier means of purification, which makes it more acceptable and increases the demand.

There is an increasing dominance of synthetic drugs in the pharmaceutical industry, which is expected to propel the requirement of raw materials such as small molecule APIs for production. Moreover, technological advancements related to the enhancement of existing products are expected to provide new opportunities for small molecule therapeutics. For instance, in March 2022, Evonik launched the new EUDRATECSoluFlow technology that enhances the solubility of oral small molecules.

The market is driven by positive government support for the production of APIs in various regions, particularly in Asia, where the majority of API manufacturers are dependent on the supply of API for the production of synthetic small molecule APIs. There has been an increasing focus on outsourcing activities for API production. For instance, in April 2020, for managing COVID-19, Wavelength Pharmaceuticals expanded the supply of key drug ingredients for certain pharmaceutical products needed to manage respiratory critical care patients and launched API CDMO services. Emerging markets such as China, India, and Southeast Asia represent significant opportunities for growth.

Key players operating in the market are focusing on collaboration for the production of potent API products. For instance, in August 2021, Almac Sciences signed an agreement with Pila Pharma for the production of the API XEN-D0501, a highly potent and selective small molecule TRPV1 antagonist. Moreover, CDMOs are constantly evolving by expanding their capacities to meet the heightened demand for synthetic drugs. For instance, in April 2022, AGC Inc. announced the expansion of its Spanish facility by 7500 m2 for synthetic pharmaceutical production, which is expected to enhance the demand for synthetic small molecule active pharmaceutical ingredients in the region.

The in-house segment dominated the overall market with a revenue share of over 60.08% in 2021. The growth of the segment can be attributed to manufacturers aiming to lower the reliance on CDMOs and suppliers for raw materials and rather focusing on developing their own API. For instance, in April 2021, Lonza launched a new small-molecule manufacturing complexat its Visp, Switzerland, site that would enhance future small-molecule technologies expansion.

The outsourced segment is expected to grow at the fastest rate over the forecast period owing to the increasing shift of manufacturing companies towards contract research and development organizations for the production of API commercially. For instance, in 2021, Curia, a CDMO invested more than USD 35 million in the expansion of its commercial manufacturing capacity at its Rensselaer, New York facility. Moreover, the increasing demand for the requirement of complex manufacturing processes further increases the growth of the segment.

The cardiology segment led the market with a revenue share of over 20.13% in 2021. This is attributed to the increasing prevalence of target diseases worldwide owing to changes in food habits and lifestyles. Moreover, the market is driven by increasing implementation of treatment for cardiovascular conditions. Hypertension and atrial fibrillation drug sales account for one of the highest shares in the CVD drugs and API market. According to the WHO in 2021, around 1.28 billion adults are estimated to have hypertension, which accounts for a larger share of drug sales.

The oncology segment is projected to grow at the fastest rate over the forecast period. The increasing global prevalence of cancer is a key factor driving this market. Moreover, an increase in oncology research and development is resulting in the launch of a number of novel drugs that further boost oncology adoption, which, in turn, fuels the growth of the oncology segment. For instance, in 2021, 9 novel drugs were launched, which were developed from small molecule API for the treatment of various forms of cancer.

North America accounted for the largest revenue share of over 35.33% in 2021. This can be attributed to the increasing support from the government with favorable initiatives, coupled with the increased interest of players in the development of novel products in the region. For instance, in September 2021, AbbVie announced the U.S. FDA approval of Qulipta (atogepant) for episodic migraine in adults. The medication is the first and only oral antagonist of the calcitonin gene-related peptide receptor. Moreover, the government in this region is becoming increasingly supportive in terms of regulation of API production, which further has reduced the dependence of the region on Asian manufacturers.

Asia Pacific is estimated to be the fastest-growing segment over the forecast period due to the dependence of pharmaceutical manufacturers for API production on China and India, increasing focus on the development of less complex molecules that can be produced in bulk, and involvement in supplying API globally at a low cost. Moreover, increasing government support for investments in API businesses is leading to growth.