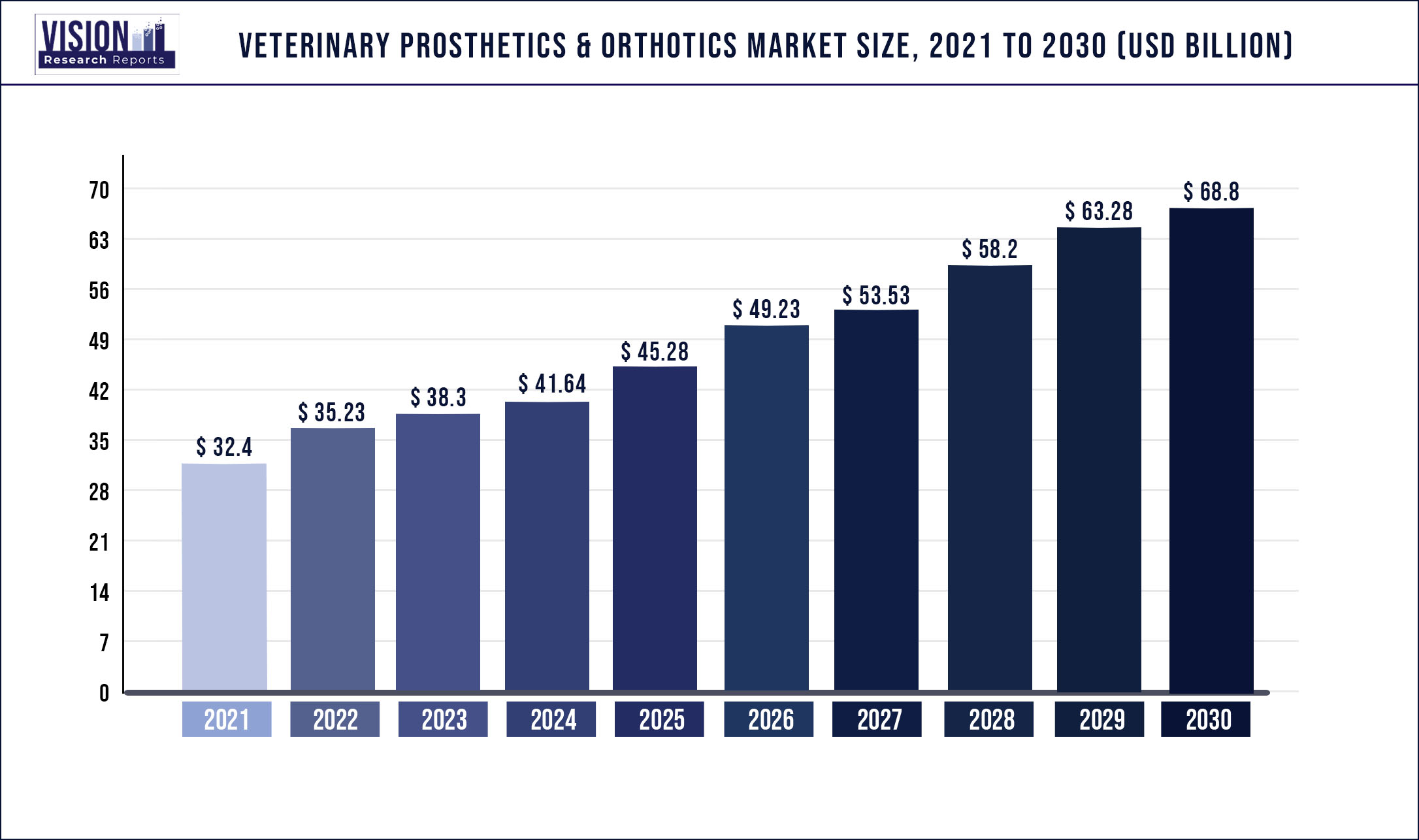 The market is expected to expand at a significant CAGR of 8.9% from 2022 to 2030. Some of the drivers attributing to the market growth include rising pet dog ownership, the number of veterinary surgeries across the globe, initiatives by key companies, and orthopedic disorders in pet dogs. For injured animals, the use of orthoses (braces) and prostheses is becoming more widespread. Any medical device that is fastened to the body to provision, position, immobilize, prevent or correct deformity, help weak muscles, or increase function is referred to as an orthosis. Prosthetics are also medical devices that are used to replace a missing or severed leg section.

The COVID-19 pandemic led to a decrease in revenue for market players in the veterinary prosthetics & orthotics market. This was due to cancellation or delay in elective surgical procedures during 2020. Other challenges faced by key companies included logistical bottlenecks and dampened demand. The market, however, recovered gradually to pre-COVID numbers during 2021. In addition, the COVID-19 pandemic has catalyzed pet ownership according to findings of the Pet Food Manufacturers Association (PFMA), U.K. This is expected to contribute to market growth. The findings of the two surveys conducted in 2020 by the PFMA during the COVID-19 crisis confirmed a surge in pet ownership in the U.K. Around 3.2 million households or 11% of people brought home a pet since the start of the pandemic.

The market is predicted to rise due to factors such as the increased prevalence of obesity and the growing pet population. According to the American Pet Products Association's (APPA) 2019-2020 National Pet Owners Survey, 67% of households, or about 85 million families, in the U.S. have a pet. Furthermore, there has been a large increase in the worldwide animal population, which is expected to push the market studied in the future. According to the Department of Environment, Food and Rural Affairs' Farming Statistics 2018, the U.K. had 9.6 million cattle and calves in 2018. According to data provided by the United States Department of Agriculture, there were approximately 7.9 million cows and calves in Mexico in 2019, up from 7.7 million in 2018.

The canine segment held the largest market share of more than 60% in 2021 and is expected to grow at a high rate over the forecast period. Rising pet ownership and expenditure on pets is a key factor contributing to the demand for veterinary prosthetics & orthotics. As per FEDIAF’s 2020 report, 33% or 88 million European households own a pet. This number is anticipated to increase owing to increasing disposable income, declining birth rates in many countries, and pet humanization. Pet owners are worried about their pets and, hence, the demand for efficient treatment is increasing. This trend is expected to continue, thus, fueling market growth during the forecast period.

The feline segment is estimated to grow at the fastest CAGR of over 9% over the forecast period. Furthermore, there has been a large increase in the worldwide population of farm animals, birds, and horses, which is expected to drive the market to study in the future. The global livestock population has also been facing rapid growth over the past few decades. According to the USDA, there were around 103 million cattle and 32.05 million beef cows in the U.S. in July 2020 and the number is expected to grow substantially in the coming years.

The 3D printing segment held the dominant share of the market in 2021, owing to an increase in technological advancement. Printed prosthetics can be light, inexpensive, and completely personalized. For instance, Bionic Pets is the leading provider of animal orthotics and prosthetics. DiveDesign saw an opportunity for innovation in its prosthetics development as part of its quest to transform animal rehabilitation and pain management. DiveDesign developed a digital tool using 3D scanning and printing technology to speed up the production of a full-limb prosthesis.

Furthermore, 3D printing is well renowned for its ability to benefit people from many walks of life, including animals. Animals who have lost limbs or any other essential body parts can benefit from 3D printing in the same way that people can. Numerous animals have had the opportunity to receive tailored 3d printed orthotics or prosthetics, considerably improving their life, owing to increasingly affordable technologies and accurate scans.

The Prosthetics segment held the largest market share in 2021 and is expected to grow at a high rate over the forecast period. It offers certain advantages over other products and is seen as a viable alternative for surgical treatments and post-surgery recovery support. Animal prostheses are medical devices that help animals with lost or severed limbs. The key factors driving market expansion are technological advancements in prostheses and increased adoption rates. Furthermore, technological developments and the introduction of low-cost 3D-printed prosthetics are likely to enhance the market growth.

Furthermore, the growing awareness of prosthetics across numerous organizations contributes to market growth. Bionic Pets, for example, is a company founded by a Penn State alum that makes prosthetics and braces for a variety of animals. It distributes casting molds all around the world before manufacturing prosthetic legs or braces in Sterling, Virginia. As a result of the aforementioned factors, the prosthetics market is predicted to increase significantly over the forecast period.

North America held over 45% of the veterinary prosthetics & orthotics market in 2021. Higher availability of therapeutic choices for animals, greater awareness of prosthetics & orthotics, the existence of key market participants, and rising animal health expenditure are all contributing aspects to this region's dominance and growth. Furthermore, with rising companion animal adoption, increasing prevalence of canine arthritis, and rising per capita animal health expenditure, the U.S. is expected to dominate the North American animal veterinary & orthotics market over the forecast period.

The rest of the World is estimated to grow at the fastest CAGR of over 11.3% over the next few years. This is owing to the growing presence of local players, increasing pet dog population, and expenditure on pets. In addition, obesity and overweight are directly associated with osteoarthritis and movement disorders in animals, so an increase in this disease is expected to drive demand for orthotic devices. Excess fat and weight increase stress on the joints, leading to further difficulty in developing and moving arthritis.