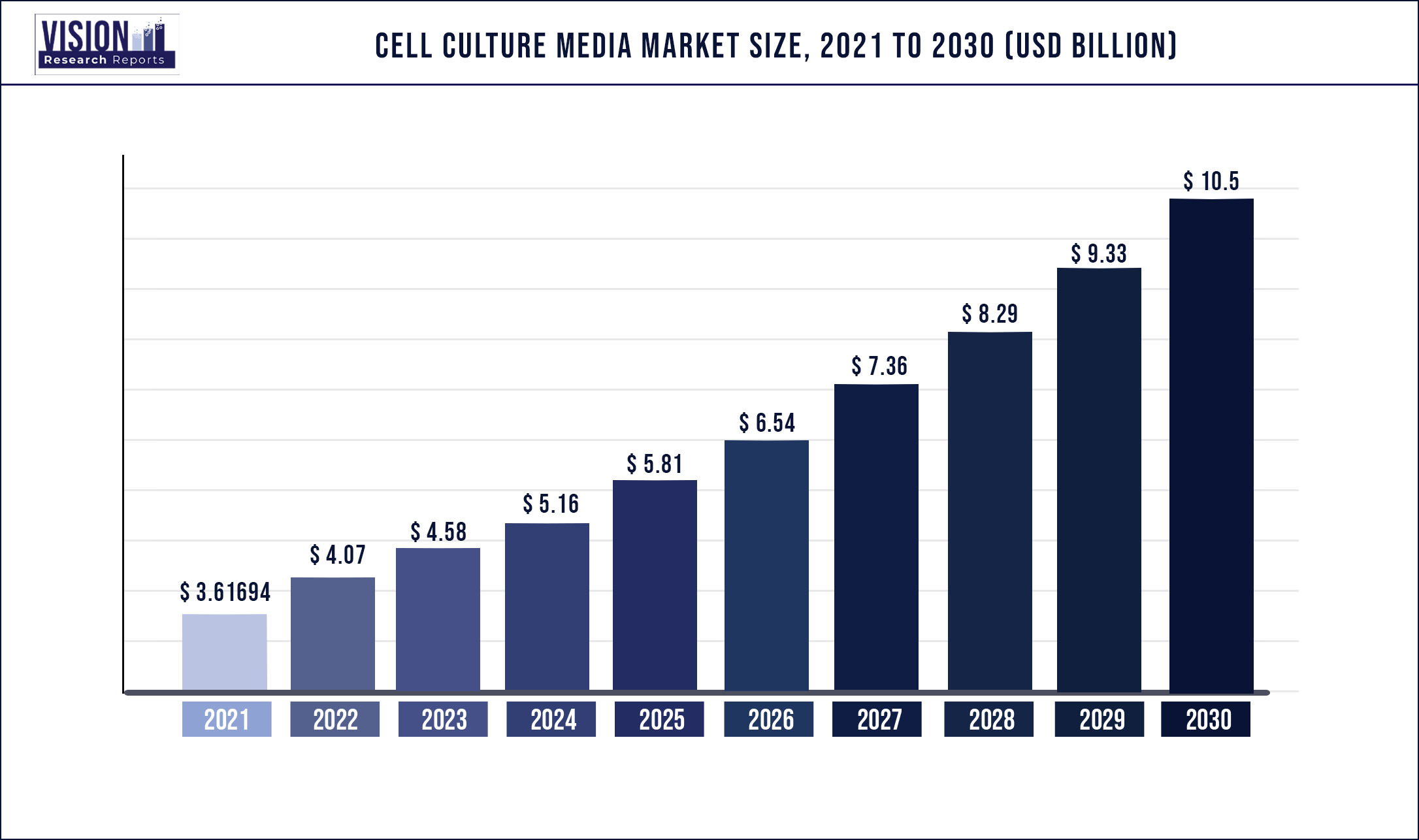 Expansion of biosimilars and biologics, growth in stem cell research, and emerging bio manufacturing technologies for cell-based vaccines are the major factors which are likely to drive the market. For instance, in October 2021, the Australian Government funded the Australian-led stem cell research through USD 25 million in grants.

The expansion of clear, regulatory approval paths for biosimilars in emerging markets is generating great opportunities for biosimilar monoclonal antibodies.  The availability of an approval pathway in the U.S., has led to new opportunities for bio manufacturers to enter major markets around the globe. Biosimilar versions of monoclonal antibodies have the probability to offer cost reductions of 25-30%, and many emerging market countries are vigorously developing pathways for approvals and are swiftly catching up. As this industry is expanding the key biopharmaceutical players are adopting robust culturing technologies to meet the increasing demand; thereby driving the growth of the market.

Moreover, there is growing interest in improving the stem cell culture, because this technology is being used extensively in research for studying the stem cell biology, as well as for therapeutic applications. Furthermore, funding related to this research field has augmented in recent years which has accelerated the growth of the market. In addition to this, key media manufacturers launched new products for stem cell research. For instance, in September 2021, Bio-Techne Corporation launched a novel medium for the maintenance and expansion of induced pluripotent stem cells having applications in both translational and research workflows.

The outbreak of COVID-19 pandemic has improved the demand for well-established cell-based vaccine production technologies. Moreover, it has given rise to a few scientific innovations, particularly in the production and testing of vaccine technology. For instance, the Vero line originated from the African green monkey kidney and has been extensively used for viral vaccine manufacturing. It has also been used for the development of various SARS-CoV variants. ProVeroTM1 Serum-free Medium is one such medium manufactured by Lonza Bioscience which is protein-free, and of non-animal origin designed to support the growth of Vero cells and MDCK.

Moreover, in many European countries, cell-based flu vaccines have been approved. A probable advantage of cell culture technology is that it authorizes faster start-up of the manufacturing of vaccines during the pandemic. Today, the development of superior biological models, the optimization of culture growth medium, and the reduced dependence on animal-derived components endure to drive the rapidly developing vaccine development.

On the other hand, ethical issues concerning the use of animal-derived products hinders the industry growth. For instance, FBS is collected from the blood of fetal calves is one of the major ethical issues of serum containing media. It is projected that 600,000 liters of FBS is achieved from up to 1.8 million bovine fetuses are produced globally every year, presenting momentous scientific and ethical challenges. To overcome this issue, numerous workshops were held in the past on the replacement of fetal bovine serum and possible ways to reduce the use of FBS in media.

The SFM segment held the highest revenue share of 35.96% in 2021. The use of SFM signifies a significant tool, which allows the researchers to perform specific application or grow a specific cell type without using serum. Advantages of using SFM include increased growth and/or productivity, more consistent performance, better control over physiological sensitivity, and to diminish the risk of infection by serum-borne adventitious agents in the culture. In addition, serum-free alternatives better serve the animal welfare which is the major factor driving the adoption of SFM.

In addition, the field of gene and cell therapy is rapidly growing, and the Food and Drug Administration regulatory guidelines are demanding more control of raw materials to sustain the reliable and safe manufacturing of drug products. The use of SFM offers an opportunity to produce additional reproducible formulations and fewer batch-to-batch variability.

Moreover, strategic activities by key biopharmaceutical companies also drive the segment growth. For instance, in July 2021 Cytiva and Pall Corporation invested USD 1.5 billion for over two years to meet the rising demand for biotechnology solutions. The two companies plan to invest USD 400+ million for culture media in powder or liquid along with expanding its operations in the U.S., Austria, and U.K.

The liquid media segment captured the highest revenue share of 62.65 in 2021. An increasing number of biologics and biosimilars manufacturers, both downstream and upstream, are switching from premixed powders to liquid media owing to the factors such as rapid mycobacterial growth and high rate of isolation. Moreover, it eradicates a few process steps, and also reduces the probability of hazardous exposure, and makes manufacturing and development more flexible and simpler than powdered media. In addition, ready-to-use liquid media also eliminates the need for mixing containers, balances, and installation of water for injection (WFI) loop which is needed for mixing powder media.

The segment is also being driven by the strategic activities of the manufacturers, for instance, in June 2021, Sartorius, opened its new site in Israel, which focuses on customized and specialty cell culture mainly for the advanced therapies market. This site will serve as a significant production site for buffers and liquid cell culture.

In addition, increasing clinical trials will further offer lucrative opportunities in the review period. For instance, in 2021, the number of industry-sponsored trials in progress for regenerative medicine augmented by 100 as compared to 2020, bringing the total to 1,320. There were 1,328 regenerative medicine trials in progress worldwide supported by non-industry groups such as government entities and academic centers.

North America dominated the market and accounted for the largest revenue share of 38.27% in 2021. This major share can be attributed to the growth in the pharmaceutical and biotechnology industries, mounting approvals for cell culture-based vaccines, and rising incidence of diseases such as cancer coupled with investments and funding in cell-based research.

In Asia Pacific, the market is estimated to grow fast owing to the increase in awareness associated with the use of the cell culture technique. Furthermore, strategic activities by key players to expand their presence in the Asia Pacific countries to capture high market share is expected to offer lucrative opportunities. For instance, In December 2021, Fujifilm Irvine Scientific, Inc., in China started the construction to build its new bioprocessing center, with the aim to ensure cell culture media optimization support for biotherapeutic drug development, vaccines, and advanced therapies.